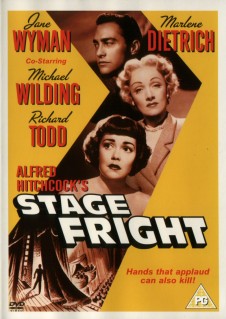 “Stage Fright” is one of the forgotten Hitchcock films, and usually for good reason. While the film has its share of twists and turns, the plot is something you’d see in a comedic Jane Austin novel and ends up being forgettable by the end, though is saved by some abstract cinematography and a performance from the always charming Alistair Sims.

Set in London, struggling actress Eve Gill (Jane Wyman) has to hide her crush, Jonathan, (Richard Todd) from the police after he is convicted of murdering his lover’s husband. Jonathan is convinced that his lover, the famous actress Charlotte Inwood (Marlene Dietrich) actually killed her own husband and is framing Jon, so Eve sets out prove his innocence along with the help of her eccentric father (Alistair Sims).

The main theme of “Stage Fright” is to prove who the best actress is, as both Eve and Charlotte continue to hide behind the many personas they’ve built and how well they can keep up these lies with an active audience – the police. Eve continually has to create characters to gain information from a detective, the maid who supposedly witnessed the murder, and Charlotte herself by taking over for the maid. Charlotte, while being a world-famous actress, never seems bothered by her husband’s death and has no problem framing her lover for the murder. Perhaps she never loved him and was only using him as a tool get out of a loveless marriage? 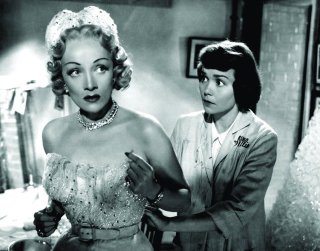 Unlike most Hitchcock films, “Stage Fright” opens up with the crime being committed, and the film convincing us there was a double-cross. Yet, there is room for doubt. We see the crime through a flashback from a man who is blinded by his love for Charlotte. But Eve is convinced that Jon is telling the truth, so we spend most of the movie believing that he is innocent and justice must be served.

It is too bad that most of the film is spent on the budding relationship between Eve and the detective investigating the murder, because any chemistry between the two comes off as forced and contrived, added to give “Stage Fright” a romantic side.

But the best part of “Stage Fright” is Eve’s father and the performance by Alistair Sims. He starts off as this hardened sailor who doesn’t take crap from anyone except his daughter who he would do anything for. This leads to a performance that is both stubborn yet caring, sarcastic yet loving. He gets sucked into his roles just as easily as Eve does and he has a blast solving his murder case.

Overall, while there are some original ideas for Hitchcock in “Stage Fright” the story is far from compelling and most of the side characters, outside of Eve’s father, are forgettable. The cinematography is the usual-fare for a Hitchcock film, with some great manipulations of perspective and deep focus, but it does little elevate the plot. This is a pretty standard Alfred Hitchcock film.