One of the first things I learned about being a director is the main role that one must serve – to lead the actors into giving the best possible performance they can. Whether that is providing proper motivation, being their best critic or their best friend, a directors’ first duty is to the actors. And while that role has expanded to encompassing nearly every aspect of filmmaking, the sign of a good director does ultimately come back to how well one can direct the actors.

I bring this up because “Rogue One: A Star Wars Story” has the same director as 2014’s “Godzilla,” Gareth Edwards. “Godzilla” is an great comparison piece to “Rogue One,” since many of the same strength and weaknesses are present in both movies, evident by the same filmmaker.

In my initial review of “Godzilla,” I talked about I adored the size and scope of the monsters and overall terror that Godzilla presents, but that the only notable performances were from Bryan Cranston and Ken Watanabe. Since then, my feelings have expanded to feeling that most of the human scenes were forgettable after Bryan Cranston’s character is killed, but that the monster scenes were handled fantastically even though there weren’t many of them.

After watching “Rogue One,” I am convinced that Gareth Edwards is a master of handling size and scope to provoke awe and wonder, but his ability to direct actors leaves a lot to be desired. Unlike “Godzilla,” which had many accomplished actors in it, “Rogue One” is lacking in that department (continuing the trend of Star Wars by hiring mostly unknown actors for their leads), and thus any good performances rely on the ability of the director. Unfortunately, we get some lackluster performances in “Rogue One” that involve a lot of staring off into nothing and lack of emotion.

Set after the events of “The Revenge of the Sith,” the Intergalatic Empire now rules over most of the known galaxy with an iron fist and lots of blasters. The Empire wants to make sure there is no hope of defeat, even from the small group of rebels attempting to thwart their plans, so they begin work a super weapon that’ll destroy an entire planet – the Death Star.

When the rebels stumble across the daughter of one in charge of constructing the Death Star, Jyn Erso (Felicity Jones), they use all of their connections to find out exactly what the Empire is planning and to find Jyn’s father, Galen (Mads Mikkeleson). They construct a small team of rebels, including Captain Andor (Diego Luna), a former Imperial cargo pilot (Riz Ahmed), a converted Empire droid who has developed a sarcastic personality and a blind warrior who believes in the force (Donnie Yen).

Like in “Godzilla,” this film is impressive when it comes to size and scale of the monster, in this case the Empire. Other than Imperial flags flying everywhere and Stormtroopers lurking around every corner, the Star Destroyers and Death Star dwarf everything in else in the film. There’s a shot of a Star Destroyer hovering an entire city, casting everything in shadow. You really get the impression that the Empire is in control of every last corner of the universe and that makes the challenge of overcoming this threat seem all the more impossible for our heroes.

This is also the most beautifully shot Star Wars film so far, with a lot of the shots lingering on the backgrounds of these alien worlds. One of the opening shots is an orbital descent into this beach-like world with massive ring around the planet, and we spend what feels like three minutes watching the waves roll up and see the ring high in the sky. Or the aforementioned shot of the Star Destroyer lingering over the city. Some of the more memorable shots in “Rogue One” rely less on CGI and more of a natural beauty that I feel gets taken for granted. 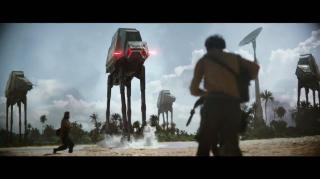 So while the size of the Empire is on full display and the film takes full advantage of great backgrounds, the biggest complaints I have with “Rogue One” are the characters and the pacing. Outside of Jyn Erso, I don’t remember any of these characters names, which is not a good start for these people when you can’t even remember their names, let alone their personalities. These are the characters that are supposed to inspire hope in a task that seems impossible, and most of them can hardly show any emotion.

Part of this problem is the acting from our two leads, Felicity Jones and Diego Luna, who remain stoic and emotionless throughout most of the film, so focused on the task at hand that they don’t take any joy in anything. Contrast this with the first Star Wars film where Luke, Han and Leia are in a similar situation, yet Luke is constantly thrilled by this exploration of space, Han is using his charm and wit to outsmart everyone and Leia is less than thrilled by the escapades of her rescuers. Those three were having fun with their performances, despite constantly being on the run and having a gun pointed at you every second.

Like Aaron-Taylor Johnson’s performance in “Godzilla,” the lead roles in “Rogue One” do very little with their performances that it teeters on boring. Everything the Empire throws at them is mostly meet with a blank stare.

But there are some memorable characters in “Rogue One,” like their robot buddy K-2SO, who always says what’s on his mind and isn’t afraid to back sass the decisions of his superiors. He was the biggest source of comic relief, a nice change of pace from the other droids we’ve had in Star Wars. Also, Donnie Yen’s blind warrior was different enough from any Star Wars character I’ve seen yet still enriched with lore, since he is devoted to the ways of the Force and constantly chants his mantra. Yen is a skilled martial artist, having previously displayed his talents in the “Ip Man” film series, and he uses his talents here as well, giving a fun hand-to-hand combat sequence between him and a gaggle of Stormtroopers.

Outside of those two and a kick-ass scene involving Darth Vader, I don’t remember much about these group of rebels.

The other problem with “Rogue One” is its pacing and how long it takes before events are set into motion. The film spends the first third hopping from one planet to another, getting little bits of information that ultimately leads nowhere other than to get the whole gang together. It isn’t until the rebels become aware of Galen’s location that the film begins to move and get interesting, at which point the pacing picks up a bit. By the end, we’re left with an exciting climax on a tropical planet that becomes a last stand for the rebels in an attempt to save thousands of lives, but it took a long time before things started getting good.

As such, the pacing for “Rogue One” is all over the map, with the first third moving as slow as a snail, the second part moving at a normal speed, and the climax going at a ridiculous speed to keep up with every character. Honestly, the first half almost feels pointless since it was all there to establish the rebels are trying to get the plans for the Death Star, which we all know because of the first Star Wars movie.

Overall, “Rogue One: A Star Wars Story” showcases the strengths and weaknesses of Gareth Edwards, both his ability to show how hopeless it is to oppose this threat, and his inability to give his leads proper direction. There are plenty of great moments, battles and characters in this movie, but the journey our heroes take wasn’t always captivating. This is certainly not a bad film, but it is not up to the quality of the original trilogy or “The Force Awakens.”