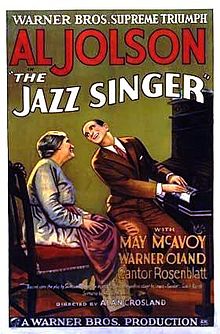 It is strange that two of the most important movies of all time are also uncomfortably controversial. 1915’s “The Birth of a Nation” is the first feature-length film, as it was the first “film” rather than just a short 20-minute picture, yet the film portrays the African American community as evil, soulless barbarians who must be stopped and the KKK are the heroes of the film. Similarly, 1927’s “The Jazz Singer” is the first movie to feature sound and active dialogue, yet its main character is a white-male in black-face for most of the film.

But I give “The Jazz Singer” far more leeway than “The Birth of a Nation.”

In the 1927 film, Jackie Rabinowitz (Al Jolson) is a struggling singer trying to make it make it big outside of being a Cantor. He makes it big when a young woman on Broadway hears him sing and tells him to perform for their latest jazz show, on the condition that sing in black-face and have his name changed to Jack Robin. Much to the dismay of his traditionally Jewish family, with his father believing that he shouldn’t sing outside of a Synagogue, Jack takes the job but is disowned by his father.

As I said, this the first “talkie,” to which every film between 1928 and now owes everything to. The only scenes that feature any audio though are when Al Jolson is singing, with the rest of the film remaining silent with title cards are exaggerated silent-era acting. While some might find this distracting, “The Jazz Singer” makes it work due to the dual nature of Jack’s character living in two different worlds – One filled with overbearing parents stuck in tradition that remains silent, and another that is loud, vibrant and full of life and sound.

It is fitting that the only time we hear Jackie is when he is singing, because that seems to be the only time he feels alive. While this was probably done due to technical limitations and still learning how this whole “sound” thing worked, the choice to go back-and-forth between silence and singing works well for “The Jazz Singer.”

Still, there’s no denying this film hasn’t aged well. The black-face is always off-putting, but understandable for the times since that was a common practice among Broadway performers in the 1920s. I’d say only watch this one if you’re interested in film history and wish to witness the first talkie.