Editorial – “Shin Godzilla” and the Beginning of a New Age 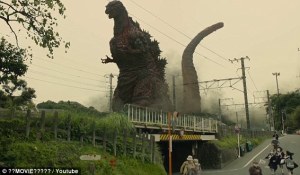 It has come to my attention that, while the overwhelming majority thought “Shin Godzilla” was a solid film that blended the terrors of giant monsters with the triumph of overcoming them, while also paying loving tribute to the films that came before it, there are some who were thrown off by the film in many ways. Some hated the cast of thousands that had no development and no reason to care for their struggle against Godzilla, while others thought it was filled with too much political discussions and not enough monster action.

But the most common complaint I’ve heard is that “Shin Godzilla” does away with the traditional style of daikaiju filmmaking, in other words suitmation. In this film, Godzilla is not some guy in a rubber suit, like he was in the previous 28 Godzilla movies, and is instead mostly a computer generated image. In fact, almost all the effects in this film were generated by computers.

Did you know that almost every tank used in the first military confrontation with Godzilla was a CGI creation? I didn’t know that until I watched a behind-the-scene clip on YouTube that showed how some of the effects were created, and it went into detail on how the tanks and helicopters were made.

Some people hate that a film style drenched in tradition and style would forgo all of that and use a modern creation. A style that goes back to the 1950s and was used all the way through the mid-2000s, and it is missing from the latest entry in the Godzilla series.

And while I see where these people are coming from and the importance of sticking to tradition, I don’t think “Shin Godzilla” would have been nearly as effective if this Godzilla was a guy in a rubber suit. If anything, “Shin Godzilla” showed the potential of CGI in Japanese monster movies and how you can do things that were never possible before.

Let me ask you a question – Before “Shin Godzilla,” what was the most recent big daikaiju movie that came out? In Japan, Godzilla hadn’t been seen since 2004 in a film that nearly killed the franchise, “Godzilla: Final Wars,” Gamera has been missing since 2006 with “Gamera: The Brave,” and Ultraman has been mostly limited to television. I bring this up because it shows that daikaiju movies died out around the mid-2000s.

There are plenty of explanations for this, including an overabundance of monster movies at the time, a lack of original stories and far too many retreads, but it was clear that around 2004, box office numbers were declining with daikaiju films and reviews were not great either. Part of this could have been that the CGI seen in other big budget films, like “The Lord of the Rings” trilogy and “King Kong,” were blowing away anything Japanese studios could make and they didn’t have the money to compete with the American studios were creating. 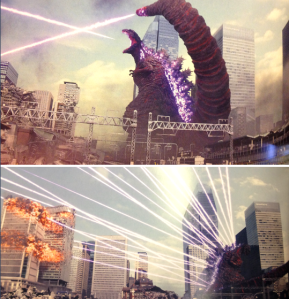 With so many films using CGI, we became accustom to that, and got use to filmmakers using that imagery to create things that we could have never seen otherwise. Because of that, audience didn’t want to see guys in rubber suits anymore.

Honestly, I don’t blame the filmmakers of “Shin Godzilla” for using mostly CGI to create Godzilla. Toho had been using small amounts of CG in the Godzilla films since “Godzilla vs. Destoroyah,” as well as every movie in the 2000s. Sometimes it is easier to get Godzilla’s size and scale across when you’re not bound by a guy in a rubber monster suit.

If you have the technology to do so, why not use it? If you want to get people interested in daikaiju movies again, you’ve got to find new ways to captivate them.

What I found the most impressive with “Shin Godzilla”‘s CGI is how well it complimented the cinematography. There were dozens of shots in this film where you see large-scale camera movement or shots with miles of city-wide destruction. There’s one shot entirely out of the side of a car, as it starts pretty far away from Godzilla, but drives closer to him, until its right next to his massive leg and caught in his trail of destruction. Or another shot where all you can only see Godzilla up to his knees, but the camera focuses on the cars and chunks of building that his feet are kicking up as he moves across the landscape. 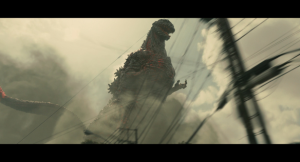 These shots would have been impossible to achieve if Godzilla was a suit.

I cannot recall much dynamic camera movement in previous Godzilla films. There were a few times where the camera would pan left or right a bit, but the camera was mostly static, especially in the early Godzilla movies. I understand why – they can’t move the camera too much because the set isn’t that big. But with “Shin Godzilla,” all of Toyko is this movies’ set.

I was blown away when I got to see Godzilla from so far away and then up-close and personal in the same shot, especially since Godzilla hardly moved in that shot. The camera is so dynamic in “Shin Godzilla” that you could have told an entire story with just the monster clips, and it would have worked out spectacularly. It was breathtaking to see a monster film where the camera movement had no limits.

On top of that, the filmmakers of “Shin Godzilla” set out to give us a Godzilla that benefited from CGI. This Godzilla has tiny skeleton-like hands that couldn’t have worked for a suit actor’s arms, and a tail that moves more than the rest of the body. He has an insanely long neck, leading to a head that has teeth everywhere, an absurdly large mouth and smallest eyes you can imagine. Not to mention, this is a constantly mutating creäture.

Is this Godzilla possible through suitmation? Sure, anything is possible, in fact a few shots in “Shin Godzilla” where they used a large puppet. They even made a full-body suit for the newest Godzilla. But they mostly stuck with CGI, to keep this Godzilla’s bodily exaggerations going.

I don’t think a little Godzilla mutating into a bigger Godzilla in the middle of a bustling city would look convincing if done using suitmation.

Which brings us to my biggest point – There are so many things you can do with CGI that would be ridiculous otherwise. I don’t doubt the power of suitmation and how clever it can be, fifty years of daikaiju filmmaking prove that, but “Shin Godzilla” proves that using CGI can be as clever. It can be used to give us impossible creatures in realistic settings, and to be combined with cinematography to give us something we’ve never seen before.

Computer generated imagery has come a long way since its conception. While there were dark days of CG, where it was everywhere and everyone thought they were an expert on it leading us to some crappy action/adventure and fantasy movies, we are now at the point where we can have entirely CG characters interact with real actors and be just as emotionally invested in them as any other character.

Any film that uses CG to make a talking racoon and a tree who are best friends, and make them the most interesting characters in the film is using CGI to its greatest potential.

Because computer generated imagery isn’t just a cheap way out of actually creating something. It is a filmmaking tool, just like a camera, lighting and an editing device. It can be used well or poorly, depending on the filmmaker. If you use it badly, it’ll stick out the like a sore thumb and break the illusion of cinema. But if used properly, then you expand your landscape and allows you to show the audience more before.

There’s no denying the appeal of the classic Godzilla movies, especially for someone like me, seeing those rubber suits and hand-crafted sets, where you can see all the hard work in the construction of the shot alone. The charm of those films may not be present in “Shin Godzilla,” but it is replaced by a new charm. One that speaks to the digital age and takes full advantage of using mostly CGI, through cinematography, monster design and atmosphere.

So, with the success of “Shin Godzilla” and its use of CGI, what does all this mean for the future of daikaiju filmmaking? I think that filmmakers are going to become far more clever and find new ways to blend computer imagery with suitmation. Just because one film found success in a new way doesn’t mean they’ll abandon the old ways. I do think this means we’ve entered a new era for daikaijus, one of exploration and possibly experimenting with combining styles. And with Toho planning on more Godzilla movies in the future, I am certainly looking forward to what is in store for us.