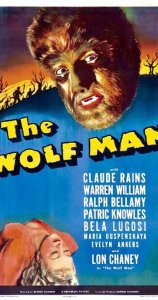 For being a movie led in the same camp as “Dracula” and “Frankenstein,” Universal’s “The Wolf Man” sure doesn’t feel like a horror film. If anything, this comes across as a psychological mystery, where you’re unsure if there really is a monster or if it is all in the head of our protagonist, Larry Talbot (Lon Chaney Jr.).

The doubt about Larry’s actions is the driving force behind “The Wolf Man.” The titular werewolf only gets about two minutes of screen time, and we never see Larry fully turn into a wolf (the most we get are his legs getting extremely hairy), so the film chooses to cast everything in mystery. Larry wakes up remembering nothing, but there are dead villagers with bite marks. Local doctors and psychologists explain that a man could give into his animal-istic tendencies, especially if he were hypnotized. Perhaps by the passing gangs of gypsies, who immediately run for the hills when they hear a werewolf is nearby. 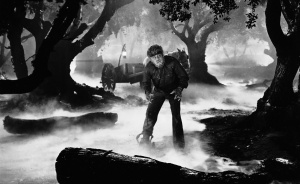 Larry is an odd character, since he starts out looking through his telescope to find a local girl running an antique shop and runs off to hit on her. He refuses to give up on this girl, even after she turns him down multiple times. Larry shows up after the store closes and takes the girl on a date she didn’t agree to. Even after he learns this girl is engaged, that doesn’t stop him from hitting on her. Larry starts out as such a sleaze-ball and I couldn’t wait for the werewolf to show up.

After he is bitten by a wolf and loses control of his own actions, possibly by the gypsy woman controlling him or by turning into a werewolf, he becomes a bit more sympathetic, since he just wants to understand what’s going on and how to put a stop to all this. Lon Chaney Jr. is wonderful for that part of the role, with his big watery eyes and permanent sad face. You can’t help but feel sorry for this man. Either that or give him a bone and pat on the head.

This is also the film that established all the classic tropes for werewolf movies. How the curse is spread, the full moon being what causes the transformation, and silver being the key to stopping a werewolf.

Overall, I enjoyed “The Wolf Man,” if only for knowing where all these stories of werewolves came from. It was nice to see the introduction to this type of story being played as a mystery and not straight horror, especially since that sets it apart from the other Universal monster flicks.