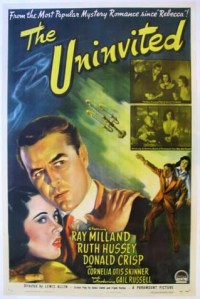 Here we have another one of those movies that began as a romantic novel that take a supernatural turn, like “The Ghost and Mrs. Muir.” “The Uninvited” is about a brother and sister that buy an old rundown house in England, which turns out to be haunted and the only way to free the ghost is to know what is troubling her.

Like with “The Ghost and Mrs. Muir,” I can see the appeal of this movie. It has romance, comedy, fantasy, horror all rolled into one and given some charming actors and actresses, like Ray Milland. To be honest, Milland’s performance the only part I liked, since he always had a happy-go-lucky attitude about the whole thing. He sells everything he owns in London to by this house, so he can’t leave even after finding out the place is haunted. He always has a brilliant smile on his face, not even a ghost can take that away from him.

But clearly, I am not the target demographic for “The Uninvited.” This is aimed for young women who don’t mind being scared now and then, but also like a bit of romance. It is a by-the-numbers fantasy romance, with some nice atmosphere and fitting music, but it does not have much else going for it.