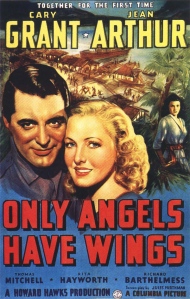 There’s one scene that really stuck with me after watching “Only Angels have Wings.” It is near the beginning of the movie, after we have been introduced to our leading lady, Bonnie Lee (Jean Arthur), arriving the small South American port of Barranca, a village that sits quietly between the sea and the Andes Mountains. Bonnie has a meal with two pilots, working out of a small agency that flies airmail through the dangerous mountains in even worse flying conditions. Barranca is almost always surrounded by either dense fog, blinding rain or below-freezing temperatures.

This agency is led by Geoff Carter (Cary Grant), who immediately orders one of these two pilots to go up for a delivery in the middle of the night, even after a thick fog has rolled in. This pilot promises to return in a few hours to have a nice steak dinner with Bonnie. The pilot goes up and has no immediate problems, but the weather gets worse as his flight continues. Carter orders him to turn around and make it back to base, but the fog is so thick now the pilot can’t see anything out his window. Even after turning on their brightest lights at headquarters, he can’t see anything.

So Carter and his best friend, Kid (Thomas Mitchell) head outside and begin listening for the hum of the planes’ engine. They hook up the radios outside and use their hearing to tell the pilot how close he is to base. During this time, Carter tells the local bar to stop playing music and shut off all lights, being able to hear the engine to the south and telling him to head north.

The pilot is far too high on his first run at the base, but he buzzes over the radio building on his second try. This gives the pilot of glimmer of hope, since he got so low he was able to spot the beacon of light and knows where it is. Carter reminds him that he has enough gas in the plane for three more hours of sustained flight and he should wait until the fog clears to make another attempt. But he is convinced that a clean landing is possible, in a hurry to get to his steak dinner with Bonnie.

Against the orders of Carter and Kid, the pilot makes one last attempt. Upon seeing the plane coming in, Carter yells for him to pull up, but it’s too late – the plane rams right into a tall tree, losing one wing immediately and the plane tumbles to the ground in the most violent way.

The reason this scene is so memorable to be is three things. One, it was done entirely from the perspective of Carter and the people on the ground. We never cut up to the plane until it slams into the tree, so we are put in the same situation as the ground crew, having to use only our hearing to save this man’s life. Two is how tense and suspenseful this scene was. Even though we hardly knew anything about this man, we know that every time he goes up in that plane could be his last. Even the most skilled pilots would find this situation impossible, so we’re immediately invested in this quiet scene and whether this man lives. The final reason is how it builds the dangerous world these pilots live in. Rather than relying on your sight to land a plane, in this area it requires your hearing and instincts. Take into account this takes place in the late 1930s and the types of planes they had back then, and you’ve got a flying situation that will never end well for anyone.

What a great way to open up a movie about pilots who deliver airmail in a dangerous South American village.

It is unfortunate that the rest of the film doesn’t match this opening. The following scenes of the fellow pilots and Bonnie reacting to the crash are great, as well as the first conversation between Carter and Bonnie, but after that the rest of the film is just a bunch of disjointed flying sequences. It is easy to lose track of why they’re flying after the halfway point, which is a little disheartening considering the solid opening.