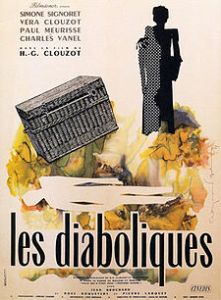 What do you do when two rather unlikable yet relatable characters want to kill an irredeemable despicable character? You get a twist thriller where everyone gets what is coming to them.

“Diabolique” is a French black-and-white thriller that has been described “Hitchcock-ian” in the best possible way. And while I see the similarities between this and some of Hitchcock’s murder mysteries like “Rope” and “Rear Window,” “Diabolique” adds a level of hatred and pity that is absent from most of the Master of Suspense’s thrillers, something that I’ve only found in French filmmaking.

In a normal Hitchcock film, the main characters are there to be the lenses for the audience. They have phobias and wit certainly, but they also don’t try to make the audience hate them (unless you’re “Vertigo” or “Psycho,” in which case that all goes out the window). But with “Diabolique,” I couldn’t completely relate to those two women, Christina and Nicole, who are both teachers at an all-boys boarding school. Christina is married to the headmaster of the school, Michel, while Nicole is Michel’s mistress, and both have come to realize that Michel is a terrible person and they would both be better off if he was gone. So the two begin to formulate a plan to murder Michel and make his death look like an accident.

Christina continually has second thoughts about the murder. She is a devoted catholic and was raised by the church her entire life, but Michel is an abusive spouse who is only after Christina’s money. Because of her upbringing, she can’t get a divorce without shaming herself for the rest of her life. Nicole, being cold-hearted but understanding of Christina’s suffering, convinces her that murder is the only solution.

There is this strange feeling I get with both Christina and Nicole throughout “Diabolique,” where I see them as both the heroes and the villains. Technically, they’re murdering an innocent man, even though most would say the world would be better off without him. Their reasons for committing such terrible actions make sense and are logically right, yet they are still morally wrong. Nicole and Christina exist in a grey area where you can sympathize with their struggles, yet feel sick that they’d end another life for their own needs.

“Diabolique”‘s tension and mystery gets cranked up to eleven during the second half of the film, when the body mysteriously disappears. The murder they had so perfectly planned goes awry when they feel something supernatural happens. Things get even more complicated when students keep claiming they’ve seen Michel around the school. The terrible deeds of Nicole and Christina will not stop haunting them, which makes that grey area so rewarding as the film progresses.

So while there is a Hitchcock influence in “Diabolique,” the moral ambiguity that can only be found in French cinema elevates this film even further. It paints a portrait of three darkened lives trying their best to control everyone around them, and failing miserably at it. This is one of the best thrillers I’ve seen in a long time, with memorable twists, pitch-perfect atmosphere and satisfying all the tension it was building up to.