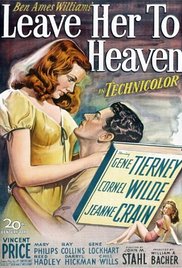 I had one thought going through my mind after watching “Leave Her to Heaven” – This lady is the biggest bitch I’ve ever seen!

I give Gene Tierney all the credit in the world for turning in a performance that made me hate someone like I’ve never hated before. Tierney plays Ellen Berent, a woman who most of her family says “loves too much.” Because when Ellen falls in love with you, it’s like the devil has you in a vice grip that only gets stronger. She is unbelievably possessive, marrying our protagonist Richard Harland (Cornel Wilde), and promising that it’ll only ever be the two of them in their lives. In her eyes, they don’t need anyone else, just each other.

But, seeing how most people thrive on human interaction, Ellen’s idea goes about as well as you’d expect – Family and friends get in the way, Richard is a novelist and has to interact with the outside world to make a living, and Richard wants to have a family.

Yeah, when Ellen said she only wanted the two of them, she meant just her and Richard, not anyone else. Not even their offspring.

It also doesn’t help that Ellen gets jealous at the drop of a hat. If Richard even thinks about spending time with someone besides her, she begins to look at others as though her gaze would set them on fire. She’s always in this mindset though, since Richard eventually moves in with her family and spends an awful lot of time with Ellen’s adopted sister Ruth (Jeanne Crain).

So, being the gentle soul she is, Ellen will take any steps necessary to make sure Richard loves only her. At first, she tries simple things, like isolating the two of them from the rest of the world, but Richard eventually gets bored and invites his younger brother, his childhood friend and Ellen’s family. This causes her to start taking more drastic steps that don’t end well for anyone.

Think of “Leave Her to Heaven” as a technicolor version of “Fatal Attraction,” expect with an even more psychotic yet loving wife. Gene Tierney, who was mostly known for playing kind-hearted women you’d love to settle down with, went against type-cast in this role and gave a performance that teetered between obsession and being mentally unstable, all while claiming it was for love. I won’t go into details about what Ellen does, but I will say that her actions are certainly worth watching.