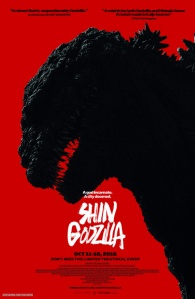 WARNING – SOME SPOILERS BELOW!

It has been 62 years since Godzilla began to thrill us, terrify us and make us excited about more giant monster movies from Japan. To me, Godzilla is creature that brings out the best and worst in ourselves – created by our own desire to have the best atomic weapons even if that meant we destroyed everything we hold close, yet we must forgive humanity for those mistakes and protect humanity from these abominations of nature and work towards a better future.

The meaning of Godzilla has changed throughout the years, from the original 1954 using him as a symbol of nuclear destruction, to the 1984 remake using that idea to say something about the Cold War-conflict, and the 1990s films that were about our inability to control nature and the world around us. Throw in themes about pollution, the rising fear of Communism throughout the world and the growing generations’ lack of respect for those who died during World War II, and you’ve got a pretty good idea of where the Godzilla films have been.

Then you get the ones where Godzilla fights his mechanical clone built by aliens using a new metal called space titanium, or a monster that looks like a chicken with hooks for hands and a buzzsaw on his chest, and you send mixed messages.

Which brings us to the 31st entry in the Godzilla series, “Shin Godzilla” or “Godzilla Resurgence,” which has left some mixed feelings among fans of the series. This film decides to take a serious approach to Godzilla’s newest attack on Japan and all the problems that come with a giant lizard popping up in the world. Some fans have said it is far too much like the original “Godzilla.” To those fans, I say there is plenty more that “Shin Godzilla” has to offer outside of a modern-day equivalent to the 1954 film. In fact, I don’t think comparing “Godzilla Resurgence” to the original Godzilla is fair at all, nor comparing it to any other Godzilla film because this one stands out on its own.

Set in modern-day Japan, a mysterious geyser of steam and water shoots out of Tokyo Bay and destroys part of the Tokyo Bay-Aqua Line. The heads of the Japanese government immediately work to decide what this might be, most saying it is some sort of new volcanic activity, and what should be done about it. One of the deputy secretaries, Rando Yaguchi (Hiroshi Hasegawa), surmises that it must be a living oceanic creature but is almost laughed out of the room – Until a massive tail rises out of the water and begins to move towards land.

For those who are wondering, “Shin Godzilla” is not a sequel to Gareth Edwards’ 2014 “Godzilla” movie. It is not connected to that film in any way, this was made by the Japanese company who have given us 28 other Godzilla entries, Toho. This is also the first Godzilla movie Toho has made in 12 years, the last one being the abysmal “Godzilla: Final Wars.” Additionally, “Shin Godzilla” is not entirely men in rubber suits, using a large amount of computer generated imagery and motion capture, a first for Japanese Godzilla movies.

This new Godzilla is portrayed in ways that would have been difficult or impossible using suitmation. With tiny skeleton-like claws, a tail that seems to have a mind of its own, and a jaw that Godzilla can practically unhinge to unleash his atomic ray. This Godzilla is also constantly glowing red, as if this monstrosity had been through some sort of fire and what we see are the smoldering remains. His mouth goes up more than half of his face and has dozens of teeth scattered in odds places. Then there are his miniscule eyes, which go unnoticed at times, until Godzilla begins to fight back and his beady eyes roll over black.

To top it all off, this Godzilla is an ever-evolving creature. The first time we see Godzilla, he is no bigger than a five-story building, walking around on two tiny legs and has no arms, like an eel that sprouted legs, with blood spewing from his gills. Soon after, he learns to stand upright and his skin turns from a beige color to blood-red, while also nearly doubling in size.

Through Godzilla’s design and unpredictable body structure, I was always terrified anytime Godzilla was on-screen. Rather than going for the awe of Godzilla’s size and power, like the 2014 film, “Shin Godzilla” reminds us how horrifying monsters can be.

Although Godzilla is the focus of this film, he is not on-screen for long. Most of the film is spent on the Japanese government reacting to Godzilla’s emergence, the process they take to stop him, and all the red tape that comes with it. Every decision to combat Godzilla has a hearing and meeting with officials and delegates to discuss everything legally. The Prime Minister feels suffocated by all this legal jargon just to get simple actions done, like giving evacuation orders and military strikes against Godzilla.

A situation that requires compassion and empathy is treated with cold and sterile questioning by the governmental system. Democracy was not equipped to deal with giant monster attacks in a timely and effective manner.

In any other monster movie, this would seem tedious and boring, but “Shin Godzilla” pulls it off masterfully through manipulating the film’s main character to be the country of Japan. Rather than focusing on the people fighting Godzilla, we are given possibly hundreds of different characters who have something to say about this creature. From the biologists who want more information, to the protesters outside the research laboratories fighting to keep the military from killing this new and undiscovered species, to the body-less voices we hear throughout the film talking about the stock market collapse Godzilla brought and the recovery from the attack, we are given a national perspective of this attack.

We learn very little about these characters as people, outside of Yaguchi wanting to be Prime Minister in ten years and every one reacting to someone’s stinky shirt. Instead, there is a lot of focus on hearing as many voices as possible, and the strong will of the Japanese people. After the first attack on Godzilla fails, and the United States threaten to drop a thermonuclear weapon on the monster, annihilating Tokyo in the process, there is a powerful scene where most of the government learns about their homeland is about to be destroyed by atomic fire yet again. Most of these reactions remain silent, but one thing remained – They refuse to let their country crumble like this.

I cannot think of many monster movies that lack character development, but make up for it by showing the bond between countrymen.

This leads into the triumphant last stand, led by the special task force designed to study Godzilla, instead of the military. Instead of a bombastic display of fire power and artillery, it is a battle of wits, utilizing the strengths and weaknesses of Godzilla that have been found. And the entire sequence is set to a classic military march from an old Toho monster film, created by Akira Ifukube, who scored nearly a dozen Godzilla movies.

That scene was rewarding in so many ways. As a fan of the Godzilla series, it is wonderful to hear that classic music again and to know it is being put to good use. I can’t think of many times where the Japanese people were successful in their attempts to stop Godzilla. There have been times where they stopped other weaker monsters, or stopped aliens from controlling Godzilla, but they’ve never succeeded in bringing Godzilla down. But even without that, the pride and conviction of the Japanese is on full display. Even if the face of their own demise, they are not willing to let their country die or be remembered as the land ravaged by monsters. Their plan to fight Godzilla is inventive and fun to watch, while being respectful of casualties.

The triumph of the Japanese people is made even stronger when they’re up against such a horrifying monster, probably the most difficult Godzilla for the military to combat.

Finally, while looking at “Shin Godzilla” as fan, this one was a ton of fun. With Japan being the main character of the film, and how the Japanese people had to overcome their own shortcomings and pride to work together on this, it is reminiscent of the 1950 and 1960 Godzilla films, which were about the brotherly bonds between all nations of the world to fight the greater threats.

There are many things throughout “Shin Godzilla” that only diehard Godzilla fans would understand, especially in the sounds of the movie. All of Godzilla’s roars are taken directly from films like “Mothra vs. Godzilla” and “Terror of MechaGodzilla,” and uses at least six pieces of music by Akira Ifukube, all used to great effect. Every sound effect of a building blowing up, Godzilla’s footsteps, his atomic breath, tanks firing their bombs, or something large falling over, is taken straight from the first era of Godzilla movies.

The sounds of a Godzilla film are very distinct and help give the series its identity. You can tell it is a Godzilla movie by the sound effects and the music. I had the biggest grin during the final scenes of the film, because this felt like an authentic Godzilla movie. “Shin Godzilla” was wonderful at being nostalgic without drawing too much attention to that.

Is “Shin Godzilla” perfect? No, there are several problems. Anytime the film cut to a different location or introduced a character, which happens a lot more than you think it would, there was text on-screen to enlighten us. This got tiresome after a while, especially when the text was usually pretty big and took up a nice part of the screen. It didn’t help that I was watching this with subtitles, so those bits of text had their English-parts written on top of the Japanese text, making it hard to read.

The original music for “Shin Godzilla” is hit-or-miss. Sometimes the original rocking soundtrack seemed a bit out-of-place, especially near the end when the special task force is getting their plan together. Other times it works great, like when we first see Godzilla use his atomic breath. But other times, the guitar-based soundtrack felt inappropriate.

Overall, I love “Shin Godzilla.” I would describe it as a smart monster movie, but not necessarily a deep one. It was a clever decision to make the nation of Japan the main character, especially when we get to see the fear and horror of the situation replace the logistics and emotionally detached side of governmental work. I don’t think the movie is trying to say something profound, but wanted to show the tenacity of the Japanese people and how far they had come since the first Godzilla movie. Godzilla was terrifying to behold, and the special effects were put to good use, making every shot with Godzilla in it worth remembering. And it was heart-warming to see so much love for the older films in the franchise in ways you wouldn’t expect it. This is best Godzilla since the end of the first era of movies in 1975, and one I wouldn’t mind watching many times in the future.