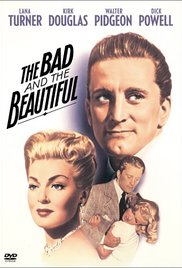 If you go back through some of my older reviews, you’ll probably notice one of my favorite “genres” is the movie about movies. Or, more specifically, movies about Hollywood. Films that show how the filmmakers not only put their blood, sweat and tears into their productions, but also a part of their souls. What we see on the screen is not just a movie to them, but a representation of themselves and their life experiences.

And there are often consequences that come with doing that.

Films like “Sunset Boulevard,” “Ed Wood” and “Rear Window” to a lesser extent, show Hollywood and filmmaking for what it truly is – A creative, brilliant world that is always selfish and far too focused on the next big thing. Now I can add another great film to that collection – “The Bad and the Beautiful.”

In this film, Kirk Douglas plays cutthroat film producer Jonathan Shields, who starts out working for a low production film company that only makes B-films, but Shields works his way up the ladder to become the leading film producer in Hollywood. But he doesn’t get there by playing nice and making friends. The film is told through three flashbacks, each one coming from a “friend” of Shields, including director Fred Amiel (Barry Sullivan), movie star Georgia Lorrison (Lana Turner) and screenwriter James Lee Bartlow (Dick Powell). Each story shows how Jonathan used each of them to his own needs and cut them loose when their usefulness ended.

In a way, “The Bad and the Beautiful”‘s framing device reminded me of “Citizen Kane” – Playing up this great man for all his accomplishments and how he changed the world for the better, beloved by everyone, but over the course of the film we learn about the terrible things this man did to get to the top, and ultimately it was his own ego and stubborn pride that caused him to sink so low. By seeing this through the eyes of his friends, not through normal narrative means, it adds to the impact this convoluted and often-crazed man left on the world.

But the framing device is only part of what makes the film so wonderful. That would mean nothing if we got a weak performance from Kirk Douglas. Luckily, Douglas gives us his usual brand of over-the-top intensity that only William Shatner can match, and yet the quiet vulnerability of a man who realizes that he’s made mistakes to get where he is. Douglas adds a nice layer of charisma to the role, as he makes it look so easy when the plays others to his own needs, making people like Georgia and James think they chose to be where they are. Shields might be a snake, but he’s also a great charmer. 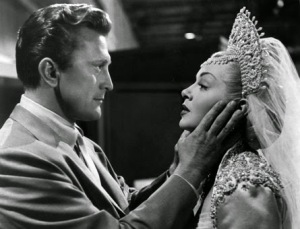 But what I love the most about this film, and what makes it so admirable, is how the film justifies Shields’ actions, to say what he was doing is the right thing. At the end of each flashback, the head of the film studio, Harry Pebbel (Walter Pidgeon), makes a sarcastic remake about how each story painted Shields as the villain, and then mentions how Shields led each of these three to stardom – Fred became one of the most reliable and decorated directors in Hollywood, Georgia is now one of the most beloved actresses in the world, and James went on to win a Pulitzer Prize.

This show that, while Jonathan might have been rotten to the core, he had people’s’ best interest in mind. He might have left many people behind, but he didn’t leave them with nothing. Shields was just a man who loved filmmaking and wanted to continue making the best product he could, no matter what the consequences were.

I could go on and on about “The Bad and the Beautiful,” especially about the similarities between these fictional characters and their real-life counterparts, like how Shields was supposed to David O. Selznick mixed with a bit of Orson Welles. This is the type of movie that I cannot get enough of, showing both the terrible and the tremendous sides to filmmaking and the ups and downs of a Hollywood career. “The Bad and the Beautiful” fights right in with many of the other best films about Hollywood.