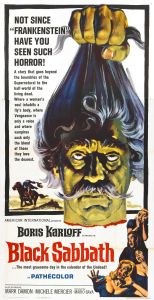 I got a taste of this genre with “Crimson Peak” last Halloween and I am beginning to see why Italian horror films, especially those by Mario Bava, resonate with horror fans. Part it might be the old-school style of filming, reminiscent of early Universal monster films like “The Mummy” and “Frankenstein,” but have the added benefit of being shot in color. As great as some of the early Universal films were, horror works better when you can see the sunken and disturbing colors on a shocked face.

Another part might be that Bava believes in the concept that true horror comes from what we don’t see, letting our imaginations and fears fill in the gaps for us.

But after doing some research on this film, “Black Sabbath,” I found that Bava shot in the film in Italian, but was heavily changed, re-edited and even re-shot when the film was bought for distribution by Warner Brothers. The reason American companies were interested in this particular movie was because Bava had begun to make a name for himself around the world as the next great master of horror, and because Bava cast Boris Karloff as the narrator throughout the film, with Karloff still being the biggest name in horror films since “Frankenstein.”

The version I saw of “Black Sabbath” was the American version, which did show the three horror anthology segments in a different order than Bava intended and lacks a proper ending narration from Karloff. 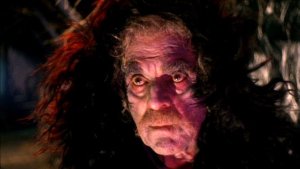 I found “A Drop Of Water” to be the most fascinating segment, since it hooks you in from the beginning with a wonderfully vibrant color scheme and a rickety old house, yet there is a single occupant that is more than content living there. It is the shortest of the three segments but makes the most of its time with a simple story of haunting an old friend who has mistreated the dead.

“The Telephone” started off wonderfully, almost like a “Twilight Zone” episode, invoking mystery and intrigue about a man considered dead contacting his girlfriend through a blood-red phone, talking about how the two of them will soon be together forever. But by the end, most of the intrigue is gone and things are wrapped up a little too nicely for how strange it was trying to be.

Finally, we have “The Wurdalak,” which feels more like a lost Universal horror film than anything else. It doesn’t have the same level of intrigue and mystery as the other two segments, so this one feels out-of-place in “Black Sabbath.” It does introduce a type of vampire I’ve never heard of, a vampire that only feeds on people they love, but it does not do anything with that premise outside of the usual vampire traits we have all heard of before.

Overall, “Black Sabbath” is hit-and-miss, or at least the American version is. I can’t say anything for the Italian version, but this did make me want to check out more of Mario Bava’s work and see his ideas of horror expanded upon. “A Drop Of Water” was brief yet satisfying, and the better parts of “The Telephone” were captivating and terrifying. But as a horror anthology movie, this one was so-so.