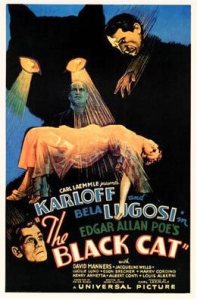 Wow, I would have never guessed – Bela Lugosi and Boris Karloff are the same height. Either Dracula is taller than I thought he was, or Frankenstein is shorter than I gave him credit for.

The height of these two massive horror stars does come into play at one point their first meeting, 1934’s “The Black Cat,” with Lugosi playing a Hungarian psychologist who has recently been released from a massive prison after 15 years, supposedly put there by Karloff, an eccentric Austrian architect who has build his futuristic mansion on a former battlefield. Lugosi blames Karloff for his imprisonment and for the death of his wife and daughter, with Karloff keeping the wife encased in a glass shrine, so that everyone may see her beauty for all eternity.

In other words, Lugosi is psychically seeking revenge, while Karloff is obsessed with collecting people and death. 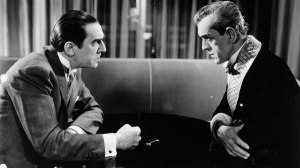 For a film coming off the heels of “Dracula” and “Frankenstein,” it is strange to see these two in roles that doesn’t involve anything supernatural. To see these icons play people, crazed as they may be, instead of other-worldly monsters and abominations. Which is why their same height is so striking – it makes you realize they are playing humans who are equally matched, instead of monsters that tower over us.

However, I will say that “The Black Cat” takes a while to get moving. There’s a plot involving a couple on their honeymoon, whom Lugosi saves and takes to Karloff’s castle for rest, but we learn little about these two, outside of the husband being a famous writer of mysteries. They move the plot forward and give Lugosi’s character something to fight for, but all they do distract from some of the better scenes involving the two lead actors.

Overall, “The Black Cat” has some great scenes between Bela Lugosi and Boris Karloff, the first time these two shared the screen together, and does a wonderful job showing how both men are despicable creatures who enjoy the sight of others in pain. But with too much focus on other uninteresting characters, this one does leave me cold, wishing there had been a tighter focus on the lead actors, or at least better written minor characters.