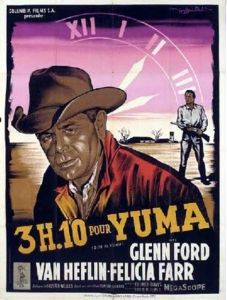 There’s a strange sense of claustrophobia in the open air throughout this black-and-white western, “3:10 To Yuma,” as Ben Wade (Glenn Ford) has to transport a well-known criminal and killer, Dan Evans (Van Heflin) from his small town to the train station, while being pursued by Dan’s gang. All the while, Dan tries to persuade Ben to join his side and let him go free for a large sum of money, and eventually resorting to threats against Ben’s wife and how badly Ben treats her.

The cinematography is what sells “3:10 To Yuma,” through its crisp and deep focus lens, where everything is clear and distinct, even something far in the distance, so that you know what Dan’s murderous gang is on the horizon. Most of the film is Glenn Ford and Van Heflin going back and forth about their life stories, with Dan showing Ben that they’re not so different, while Ben is trying to make a living while setting a good example for his family. All the while, Ben never takes his eyes off Dan, always with a slight intent that he might kill him with his shotgun that he keeps a firm grip on.

The danger is always present in “3:10 To Yuma,” and its rarely from Dan’s gang. The space around Ben keeps getting tighter, as his moral compass begins to drift. He could take the money Dan is offering him, but he’d let a guilty man walk away. He could kill Dan and end all this suffering, making everyone’s life easier. At times, the law of west begins to take hold, and Ben is constantly in a battle with himself and the times he lives in.
Final Grade: B