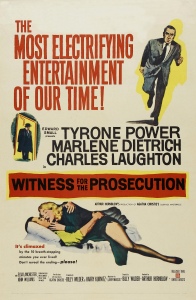 If you told me a year ago that Billy Wilder directed a courtroom drama based off an Agatha Christie play, I would have avoided it like the plague. And I did.

Courtroom dramas are some of my least favorite movies, because more often than not they all tell the same type of story and find new ways to use legal jargon that I do not understand to justify their actions. Now this isn’t to say that all courtroom dramas are terrible, I recently did a review of “Primal Fear,” which I adored for its portrayal of a decaying city that needed someone to stand up for the little guy. “12 Angry Men” is another great example, for being the most human and by far the most captivating courtroom drama I’ve seen.

I can add “Witness For The Prosecution” to that list now, as Billy Wilder stuns yet again with another wonderful entry in his extensive library.

The film follows Sir Wilfrid Robarts (Charles Laughton), who is recovering from an illness, as he takes on a “hopeless case” of an American, Leonard Vole (Tyrone Power), who reportedly murdered a rich-old widow to get at her money. Wilfrid quickly learns there is more to the case than one would expect, especially when it comes to Vole’s wife, Christine (Marlene Dietrich).

Part of the reason I enjoyed “Witness For The Prosecution” so much is due to Charles Laughton’s performance, as a man who has seen his fair share of unbelievable court cases, but realizes those days are coming to an end for him. He screams at the top of his lungs during the trial and puts his entire body into his conviction and determination that his client is not guilty, even though his body is clearly giving out over time. Yet that stops Wilfrid from giving a sarcastic comment or nasty criticism, especially towards his nurse, Ms. Plimsoll (Elsa Lanchester).

Laughton plays the role like an aging Sherlock Holmes. Wise and confident, yet vulnerable and a bit perplexed. He has years of experience, but still loves the thrill of solving the case and proving it to the entire world. To him, this is all still new and he loves dissecting the case almost as much as picking on Ms. Plimsoll.

Because of Laughton’s performance, “Witness For The Prosecution” keeps the typical wit and charm you see in Billy Wilder films like “Some Like It Hot” and “Double Indemnity,” without sacrificing the gravitas of the court case. The film is able to flip between uproarious moments between Wilfrid and his butler, and down-to-earth moments with Vole and his wife falling in love.

Overall, “Witness For The Prosecution” is similar to “Primal Fear” in how it takes the normality you’d expect in a courtroom drama and flips it on its head. Both films give us great characters who want to make a better world through justice and the law, even when all hope seems lost. This one is powered by many great performances, with Charles Laughton leading the way. I thoroughly enjoyed this one from start to finish without ever getting tired of seeing the courtroom, which might be a first.