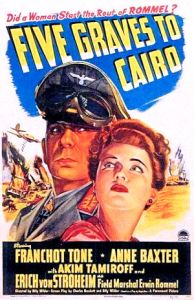 As the second film directed by Billy Wilder, this is one where we see Wilder start to nail down his darker and more puzzle-like structure to his films, but not so much that it does anything spectacular, outside of Erich Von Stroheim performance.

“Five Graves To Cairo” is a spy-thriller written and directed by Wilder, about a British officer that is stranded in a hotel just outside of Cairo during World War II, while a group of Nazis overtake the hotel and plan to use it as a base of operations in the area. The Nazis are being led by real-life German Field Marshall Erwin Rommel (Von Stroheim), and while the Englishman planned to hide in the hotel, posing as a waiter, he quickly finds out the dead man he is posing as was formerly an agent for the Nazis to gather information. The solider decides to use this to his advantage to get close to Rommel and assassinate him when no one is looking.

The story is sufficient, if a bit contrived at times, especially with the reveal of how Rommel was able to make his way across the African desert without running out of supplies. Part of the plan is ingenious and well-thought out, but another part is so specific that it raises a lot of questions about why Rommel knew exactly where he was going.

But the best part was certainly Von Stroheim, who stole the picture every time he was on-screen. The man commanded authority and seemed to have everything planned out years in advance. While everyone else in the movie was learning where they needed to go, Von Stroheim had already made it there and was enjoying a nice cool drink. There is one scene where Rommel has gathered the leaders of the military groups he has captured for dinner, and he allows these men to play 20 questions with him, where Rommel is honest and truthful about his answers and respects the intelligence of these men, yet he still is able to tell them nothing. By the time their questions are up, these men are now more confused than ever before.

Overall, “Five Graves To Cairo” is fine, helmed by a man who is still learning his craft, but it does give us some great scenes with Erich Von Stroheim as he pulls of being both respectable and menacing at the same time.