Is it possible to be a good detective and a good person at the same time? According to “The Nice Guys,” not in 1970s Los Angeles. But then again, these guys were not good detectives to begin with, so at least they’ve got that going for them.

“The Nice Guys” was written and directed by Shane Black, who most people will remember as the director of the hit-or-miss “Iron Man 3,” but others remember him for his earlier works, especially “Kiss Kiss Bang Bang.” A crime-thriller with an impeccable sense of timing and comedy and gave us some subtle yet charismatic performances from Robert Downey Jr. and Val Kilmer. “The Nice Guys” seemed to return to the roots of “Kiss Kiss Bang Bang” by taking two unlikely heroes that despise being anywhere near one another to solve an ongoing mystery, while playing it all very tongue-and-cheek.

“The Nice Guys” often feels like a combination of “Kiss Kiss Bang Bang” and “Iron Man 3,” taking the chemistry and comedy of the crime-thriller, but keeping the production value and impressive visual style of the superhero film. However, the comedy comes and goes and some performances are stronger than others.

Set in 1977’s Los Angeles, we meet our two “specialists,” the rough and often wise-cracking enforcer Jackson Healy (Russell Crowe) and the bumbling and often drunk private detective Holland March (Ryan Gosling). When March stumbles upon a missing person case, he ends up running into Healy, who threatens March if he continues his case. Eventually, the two find out that the girl they’ve been dealing with, named Amelia, is involved in some shady business, including the porn industry and Detroit’s’ automobile companies. Healy and March decide that if they’re going to find out anything about this, they’ll have to reluctantly work together.

When it comes to the characters, “The Nice Guys” can’t really make up its mind on what it wants to say. Gosling’s character is one plagued by tragic events, including the death of his wife and his house burning down due to his own error. He can’t forgive himself, and has “You will never be happy” written on the side of his hand to constantly remind him to never forget the pain, no matter how much he drinks. March asks his daughter if he’s a good person, and she immediately replies with a hard “No!”

Supposedly, March takes these cases to set a good example for his 13-year-old daughter Holly (Angourine Rice). With his job, he sees good people do terrible acts and hopes and prays the same won’t happen to Holly. March spends the first half of the movie doing this, but then we take a sharp turn from this – We see Holly do more for the case than her father does.

So I find it strange that Gosling’s character gets this oddly tragic back story for a comedy, all to show that he wants to improve himself, and the world, for his daughter, but his daughter is already smarter and more capable than he is. 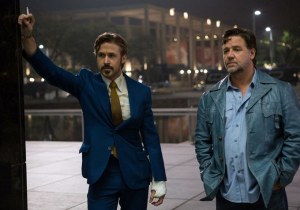 To be fair, Rice’s performance might be one of the better parts of the film. She takes everything in stride, including the many topless women and hitmen that come after them, while still keeping her innocence that her father is so desperate to cling to. And to see a young woman has capable as Holly in this movie, where every other woman is used to sell sex or is as blind as bat, is quite refreshing to see.

Also, I was blown away by the production values for “The Nice Guys” to give the film its 1970s vibe. The streets are filled with old clunkers and protesters, the air is teaming with smog and a modern building is no where in sight. There are posters for films like “Jaws 2” all over the place. Lots of little things like that to make the film feel foreign in its age, but quaint enough to still remind us of Los Angeles.

Overall, I enjoyed “The Nice Guys” even if most of the best comedy was used in the trailers. Gosling and Crowe’s on-screen chemistry was fine enough, but Rice stole the show by solving most of the mystery even while her father babied her. While often more tragic and dreary than it needed to be, especially for a comedy, this did lead to some pretty funny scenarios and some good character moments between Crowe and Rice. Not quite up to “Kiss Kiss Bang Bang”‘s level, but this was still a fun ride.