I am not going to talk about the plot of this one because it is very much a paranoid mystery that relies on your interpretation of everything happening on screen. This is a very well directed film with a ton of atmosphere and some great performances. I highly recommend that you don’t read about this film or watch any trailers, but simply go into this one fresh because that’s how my wife and I watched it, and it was thoroughly enjoyable. Again, I don’t want to talk about the plot but all you need to know is it focuses on a couple who are invited to a dinner party with their friends. It’s a slow-burn thriller, but there is more than enough mystery and tension to keep you going. Enjoy.

This is one that I was excited about as soon as I read about it. I love a good little independent thriller, especially when you throw Kevin Bacon and Shea Whigham into the mix. The premise is fun enough – a couple of kids end up stealing a corrupt sheriff’s car in a small town. We get a great, unhinged performance out of Bacon (which is always fun to watch) and plenty of fun and tension to go around. It’s realistic in its violence and its childishness, featuring a couple of good performances from the young actors. This is the film I wanted it to be when I first saw the trailer, although the ending leaves a little to be desired. I’m excited to see what director Jon Watts does next, especially since that project is the new Spider Man film. 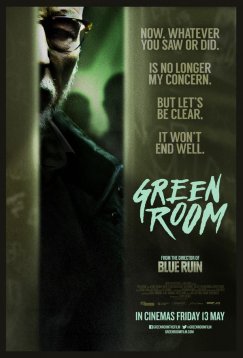 If you haven’t seen Jeremy Saulnier’s Blue Ruin from 2013, then please go out and see it now. This guy has a real knack for taking what would typically be a schlocky B-movie and turning it into a work of art, but still being able to give you the payoff you expect. His new film, Green Room, is no exception. It follows a young heavy metal band who is so desperate for a new gig that they take one at a skinhead rally in the middle of nowhere. They witness something terrible and hold themselves up in the green room while the gang tries to break in and take care of any witnesses. Yeah I know it sounds like a “grindhouse” film, and it sort of is, but Saulnier makes it so much more. This film is brutally realistic, tense, emotional, terrifying and fun. These kids aren’t stupid, this isn’t a horror film where you are yelling things at the screen because the characters are making stupid mistakes. There were actually a number of times when I was impressed with their decisions because I probably wouldn’t have thought of it in the moment. Saulnier, who also wrote the film, must have really put himself in this situation and thought about what he would do and what his friends would also do.

The actors are all great here, notably Patrick Stewart who makes a rare villain appearance as the neo-Nazi leader of the gang. Anton Yelchin is effective here as well, much better than anything I’ve seen him in recently, reminding me why I liked him as an actor in the first place. Imogen Poots, Macon Blair, and Joe Cole are also standouts here. Yelchin and Poots give the film it’s heart, while Cole and Stewart give the film it’s more badass side. Macon Blair starred in Blue Ruin and was fantastic, here is no different and I hope to see him show up in more films.

I love this film and I am honestly disappointed that I don’t see anything on Jeremy Saulnier’s docket that he’s working on. It is crazy that this is his third film, because Green Room seems like something a seasoned director would “go back to his roots” and direct. It’s obviously on a small scale, with 95% of the action taking place in one building, but it always feels professional. I wish this had been marketed more/a little better than it was. The only preview I saw of the film outside of the internet was a brief trailer in front of Midnight Special and they made it seem like a gore-fest in Hostel terms. Thankfully that was far from the case. Green Room, while violent, does not relish in the violence and does not use it to scare you. The violence is used to give a weight of gravity and realism to the situation. Yes, at times the violence is shocking, but I cannot say it is ever over-the-top. It’s obvious to me now that I have basically written a full review of this film when I didn’t want to…I guess a testament to how strong a film it is. It’s also just nice to see a film that doesn’t have a single shot of CGI – no superpowers, no trilogies – just a great director, cast, and well-written script. Go out and see this movie, it’s showing everywhere now, so get it while you can!