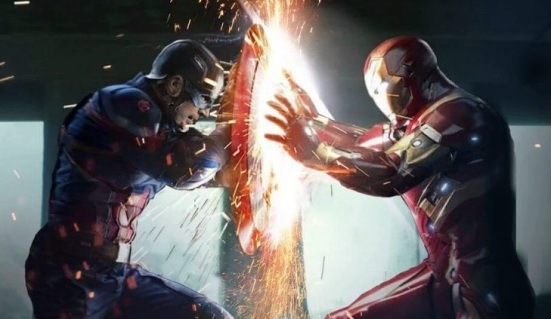 Synopsis: The Avengers are split in two when Tony Stark (Robert Downey, Jr.) and Steve Rogers (Chris Evans) are on differing sides of being held accountable for their actions. Also, a manhunt is out to catch Bucky (Sebastian Stan).

Review: This was the second Avengers film that fans wanted. In Captain America: Civil War, Tony Stark is still feeling guilty about the lost loves of Sokovia and enlists the help of U.S. Secretary of State Thaddeus Ross (William Hurt) to work at keeping the Avengers in check. This creates the Sokovia Accords, something the United Nations wants to pass in order to decide whether or not they will let the Avengers help in certain situations. Rhodes (Don Cheadle), Natasha Romanoff (Scarlett Johansson), and Vision (Paul Bettany) sign and side with Stark, while Sam (Anthony Mackie) and Wanda Maximoff (Elizabeth Olsen) side with Steve.

While all of this is going on, Bucky Barnes is trying to live a secluded life. That is until Helmut Zemo (Daniel Bruhl) draws him out of hiding and makes sure he gets caught by the official Avengers. While in custody, Zemo poses as a psychiatrist and uses trigger words to re-brainwash Bucky into the Winter Soldier and unleashes havoc on the Avengers.

Steve tries to convince Tony that Zemo is behind everything, but Tony is adamant that Bucky must come in. Steve then enlists the help of Clint Barton (Jeremy Renner) and Scott Lang (Paul Rudd), while Tony recruits young Peter Parker (Tom Holland) to help out. Both sides also meet T’Challa (Chadwick Boseman), who is seeking revenge for the death of his father.

Captain America: Civil War proves that the teaming of the Russo brothers directing and Christopher Markus and Stephen McFeely writing is currently the best that Marvel has. While Joss Whedon brought the Avengers together beautifully in the first Avengers film, Avengers: Age of Ultron didn’t live up to the magnificence of the first.

What Civil War did was the ability to blend in many different superheroes with ease. Captain America is the foundation, built on doing the right then. Then you blend in Tony Stark, who now is full of regret and hurt. You mix in some humor with Peter Parker and Scott Lang, but you keep the film grounded, something Whedon couldn’t do, turning every character into a caricature with a one-liner.

Also, while Avengers: Age of Ultron felt like a cluttered mess – and even more so in Batman v Superman: Dawn of Justice – Civil War gives enough screen time for each character, and still maintains a strong plotline and order.

One thing that everyone was skeptical about was Holland’s portrayal of Peter Parker, the third person to play the character in 14 years. Making Peter Parker younger and less experienced was perfect. Holland made Parker nerdier with hilarious scientific statements during his fights against Bucky and Falcon. He also showed his inexperience during the fight as well, which will make for great training in Spider-Man: Homecoming.

The casting of Boseman as T’Challa was great as well. As anger consumes him, you see him stop at nothing to take down Bucky, with some three way fights between Bucky, Captain America, and the Black Panther being among some of the greatest scenes in the film.

It seems that it will be hard to top Civil War when it comes to the next team up in the Marvel universe, which as of right now stands at Avengers: Infinity War. With the Russos and Markus/McFeely at the helm, however, it stands a fighting chance.

Did you see Captain America: Civil War? Do you agree with this review? Are you on Team Cap or Team Iron Man? Sound off below!