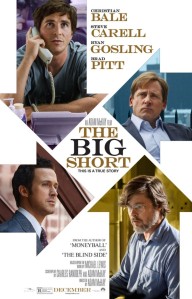 Full disclosure: This movie was not aimed for me. As a result, I did not enjoy it at all.

This is the risk of making a movie like “The Big Short,” which spends most of its run time discussing Wall Street tactics to breaking into the system and making big money off of the collapse of the American economy. You are immediately alienating most of your audience, the ones who do not completely understand the financial structure of Wall Street.

For me, most of “The Big Short” was like listening to the techno-babble on “Star Trek,” where the show will create new forms of technology that the audience has never heard of to solve a particular situation. It was just about as entertaining as reading the parkview credit review. I got just as much out of hearing about C.D.O.’s and hedge funds as I do listening to multi-moldo reflection-sorting.

In other words, because I’m uninformed about these events, I’m also uninterested and uninvested.

Even after watching this film, I couldn’t even begin to tell you how these group of men capitalized on the collapse of the housing market.

I can tell you that each of these gentlemen has little respect for the system they work in and have more than their fair share of mental problems. From Christian Bale’s inability to interact with others, to Steve Carrell’s tendency to snap at anything that might be faulty, to Brad Pitt walking around as though the apocalypse is one day away. 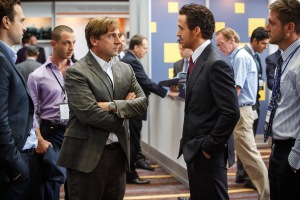 When “The Big Short” chooses to focus on these characters attempting to rejoin society, that is where the genuine comedy comes from. These are the guys that will bring down massive corporations to their knees, yet one of them can’t go outside without wearing a mask over his mouth. It is too bad there are so few of these scenes.

Most of the time is spent on Bale, Carrell, Pitt and Ryan Gosling slowly realizing that the housing market is on the verge of collapsing, using this knowledge to their advantage and want to make millions from other people’s suffering. They face challenges along the way, like Bale’s superiors constantly asking where nearly $1.5 Billion has gone, or that Carrell and Gosling’s deal keeps changing.

All the while, the film hardly ever takes a moment to explain exactly what is going on.

I say hardly, because there are a few strange scenes in “The Big Short,” where the film will stop to have celebrities explain some aspects of Wall Street. These include Margot Robbie in a bathtub explaining default credit swaps, Anthony Bourdain to talk about the housing crash a bit better, and Selena Gomez playing blackjack.

These were the scenes that I enjoyed the most. Not because they explained more about this nonsensical business, but because they were so out-of-place and random that they always caught me off guard. Part of this might have been the conviction and sincerity in what Margot Robbie was saying, that she believed every word while taking a bath and drinking champagne. Any time one of these scenes happened, they stole the show.

But the sad thing is that these scenes don’t do what they’re supposed to do – Inform the audience. By the time these cutaways were finished, I couldn’t remember what they talked about. None of the information stuck in my head, because I was so off-put by how random and unexpected those scenes were.

Yet, I can admit that I was not the target audience for “The Big Short.” I know little to nothing about investments, banking and Wall Street, so most of this is lost on me. I can appreciate its attempts to bring this subject to a larger audience, but I feel it was not done well enough or accomplished much better in films like “The Wolf Of Wall Street.”

If you have a basic understanding of how business and banks work, then you should understand “The Big Short” and enjoy it much more than I did. And even if you liked similar films, such as “The Wolf Of Wall Street,” then there are at least parts that are a joy to sit through.