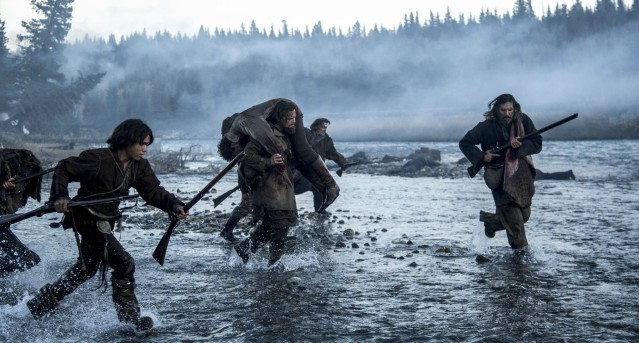 This film is a monument to brutality; an absolute monster that initiates its death march in the hunt to crush your being within the first few seconds. Emmanuel “Chivo” Lubezki‘s endless sweeping shots that we are all still coming to terms with (see Children of Men, Birdman, Gravity, shit, ANYTHING by Malick in the last 10 years) are at their most devastating and vicious throughout. You know that feeling when a day is coming to an end and you just want those last few minutes of light? That’s the feeling I got here and it lasted for a very intense 156 minutes.

The Revenant is important in so many ways, but I’d like to start with some testosterone-driven reasons. This is a revenge flick. Straight up, blackened, hardcore revenge. This is also a survival movie. Those of you guys (and ladies, I’ve met some of you, I know) that saw that previews for this and pictured Rambo running through the forests of First Blood or Anthony Hopkins fooling that Kodiak in The Edge will not be disappointed. I know, because I loved The Revenant like those movies, as if I was lost in that great hopeless expanse with them.

Now, I’ve also heard some remarks (both personally and from critics) concerning the pacing of this film. Listen, I get it. I happened to hear the same rumblings walking out of Inarritu‘s Birdman and definitely felt this way the first time I saw his epic, Babel. This is not as much movie though, as it is an experience. Experiences on the screen are meant to pick you up out of your seat and treat you as if you are part of the story. It usually is triggered at the beginning; a slow panning shot with no credits and no dialogue. Just the slow movement of the camera, welcoming you to join. If I see this at the beginning of a movie (There Will Be Blood, holy shit) I’m in, and I’m in for the long haul. The pacing is part of that experience, no matter how long Leo scuffles through the snow in silence.

I suppose I should discuss the acting. Not much to say here in the matter of female performances (sorry ladies), but hell, were there any in The Grey or First Blood? Both DiCaprio and Hardy are phenomenal in this. Here I’ve got to apologize to the ladies once more: the studs you’re used to seeing up on that screen are convincingly repugnant throughout. If you’re expecting to see some Titanic-y Leo or ripped-up Hardy, you’re going to be let down. They look more like extras that fell in the mud on Deadwood than they do Hollywood stars. This is all part of it though.

DiCaprio grabs the screen from the beginning and just puts it in his pocket. Never have I seen him more outstanding. I really felt like he was in pain and that his quest was driven by overwhelming hatred. If he doesn’t win that little gold guy in February, then there really is something wrong with the Academy (just kidding, #OscarsSoWhite). Which brings me to his fellow nominee, Hardy. There’s a lot of us out there that get Tom Hardy. We just get it. Not Bane Hardy. No, I’m talking about the incredibly horrifying beast in Bronson and the quiet badass in Warrior. While he’s great in this, and it’s definitely top-5 Hardy, this is Leo’s film. Hardy is just a really great complement to the whole show.

Now onto the music. God damn, the batshit score in this movie is so nuts. It does a great job ramping up the action scenes or pressing on your chest during some of the more emotional scenes, but where it really shines is in the film’s quieter moments. It’s really not fair to describe it in words, but it really felt like Twin Peaks-era Angelo Badalamenti being rearranged by a classically-trained serial cannibal confined to an asylum. All part of the experience.

The Revenant is not for everyone. I recognize that. Between the lack of female performances, the sheer intensity that does not let up, and the pacing, it’s enough to keep a lot of people away. If you don’t get into it, yeah, I could see how it would be slow. The only spoiler I’ll give you is in the form of this recommendation. When that first shot envelops the canvas in that theater and the music softly sweeps over the crawling shot of the bubbling mountain stream, jump in. Just let it take you. You won’t be sorry.

Rating: R for strong frontier combat (What??) and violence including gory images, a sexual assault, language and brief nudity