Welcome, one and all, to Paul’s controversial reviews!

An event that happens just once a year, in which our lovable friend and colleague disses and rags on a well-known film that everyone else in their right minds adores, and watch as Paul is torn between the popular opinion and his own feelings.

The last time we witnessed this was with “Selma,” in which I admired for its accuracy and loyalty but got bored rather quickly by retreading ground that we are now all taught in elementary school and retold every year. The year before that was “Inside Llewyn Davis,” a film that, as far as I can tell, has not aged well.

This year, that controversial review is on Alejandro G. Inarritu’s “The Revenant.”

Part of the reason I did not care for “The Revenant” is the time at which it is being released.

If you swapped Inarritu’s most recent film with his outing last year, “Birdman,” then I would have loved this film. I would have noticed it for the scenery beauty that it is, a film about the unrelenting power of nature and one man’s triumph in overcoming it with nothing but his will to live.

But because it came out in 2015, where so many other wonderful films discuss similar aspects as “The Revenant,” this one comes off a bit cold. Long tracking shots uninterrupted by editing as steady and fluid action takes place? “Birdman” made a whole movie like that. A solid western about nature confining men? “The Hateful Eight” kept me in suspense from beginning to end. A tale of a man stranded, left for dead, and forced to survive in a unbelievably harsh environment? “The Martian” was the same, except that film was consistently optimistic and uplifting, where as this one is often depressing and hard to watch.

Granted, that is exactly what “The Revenant” was going for. This is a grizzly and unflinching depiction of survival, where nature can be brutal and cold one moment, but immediately turn to unforgiving in an instant. We watch as Hugh Glass (Leonardo DiCaprio) does disgusting things that would make Bear Grylls turn away in revulsion, just so he has a chance to confront the man who killed his son, John Fitzgerald (Tom Hardy).

This is the most violent movie I’ve seen this year, and “The Revenant” does not shy away from the brutal era of de-scalping and massive piles of bone monuments.

In fact, I feel that the key scene of this film, in which Hugh Glass is attacked by a bear and struggles just to survive as his skin is ripped apart like tissue paper, summarizes up the movie perfectly, as well as my problems with it. Graphic, deep within its theme of nature’s power over us, beautiful uncut cinematography, and hard to get through. When that bear bites at Glass’ back or claws at it, you feel as though you’re being torn apart as well. The scene is almost minimalist in its approach, as there is no music or dialogue and has no editing to speak of. This sequence relies on the violence of the wilderness and DiCaprio’s performance.

But let me makes this clear – This movie is hard to get through. “The Revenant” is not fun to watch, nor is it all that entertaining, due to the rather slow pace and long stretches of Glass wandering the snow-covered landscapes desperately scavenging for food and shelter. This film is like performing chores – You don’t want to do these boring tasks, but you have to in order to get to the better things. 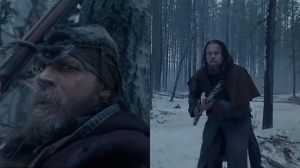 There is little to no dialogue throughout the film, especially when focusing on Glass. And while this does add to the visual storytelling aspect of “The Revenant” and makes DiCaprio’s role all the more impressive to communicate so much without saying anything, this does give us little to focus on.

Overall, there is plenty to admire about “The Revenant,” ranging from themes of man’s will against nature, to unbroken cinematography, to Leonardo DiCaprio’s performance and many memorable sequences. But this is an instance where the parts are greater than the whole. At times it is boring, while other times the low-spirited tone makes this a chore to sit through.