We’re in the closing days of 2015 and movie viewers such as myself have seen a share of good movies, overrated movies and underwhelming movies, and just plain bad movies. It was difficult trying to figure out a Top 5 list regarding this year’s film slate, but here it is.

I was originally going to do a Top 5 Worst Films in addition to this list, but most of what would be “Worst” were more movies that were decent but I found to be overrated. If you want to know about what I think is the Worst Film of 2015, check out my review on Fantastic Four.

Here are my Top 5 favorite movies of 2015. Keep in mind, my list will probably differ from lists you’ll see on major entertainment websites or even here on World of Entertainment, but these are the movies I personally enjoyed this year, regardless of what the mainstream critics thought.

There’s been conflict with this film, especially with the film critics and YouTubers such as CinemaSins and Honest Trailers ripping it to shreds. I’m sticking to my guns on this and saying that I really enjoyed the movie. Terminator 3: Rise of the Machines  and Terminator Salvation were films that didn’t sit well with me, as I felt they didn’t appreciate the spirit of the first two films helmed by James Cameron. This felt like it had more respect to the original films, while taking certain creative liberties of its own. Although the violence is toned down (PG-13 rating versus R of the first two films), Arnold Schwarzenegger shined as a spiritual successor to the Terminator he played in T2 and Emilia Clarke was outstanding as Sarah Connor. Aside from looking similar to a young Linda Hamilton mix from the first two films, she maintained elements of Hamilton’s portrayal from those films in addition to adding a fresh take on the character.

Despite some of its flaws, Genisys was plain old fun to watch; with some entertaining action and good comic relief, it earns a spot on my list.

I have been on record as being harsh on Ant-Man, especially the drama going on with the production of the movie and Marvel’s refusal to delay it so that it didn’t end up like a rushed film. Despite having a silly sounding superhero, Ant-Man was a pleasant surprise.

As much as I mentioned enjoying Avengers: Age of Ultron in my review, over time I’ve concluded that it was a bit underwhelming. The trailers for Age of Ultron made me feel like the tone would be dark and that some major conflicts would divide the Avengers, leading into Captain America: Civil War. Outside of a few scenes of tension between Steve and Tony, there weren’t many dark and shocking moments, leaving me with some disappointment. Factor in what little hype I had for Ant-Man, I wasn’t eager to see the next installment of the Marvel Cinematic Universe.

As it turned out, I enjoyed Ant-Man more than I thought I would. Heck, I even enjoyed it more than Age of Ultron. Paul Rudd defied expectations, and while he still had his comedic moments, his convincing performance as Scott Lang/Ant-Man made me actually appreciate the character despite being a B-Level superhero. In addition to the comedy aspect, the action was thoroughly entertaining and the CGI was quite impressive. The sequel can’t come soon enough. 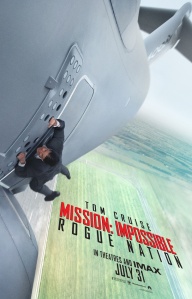 Is it just me or has Rogue Nation and Ghost Protocal completely injected new life into this film franchise? Outside of the first film in 1996, I wasn’t a fan the two follow-up films, feeling as though they focused entirely too much on Ethan Hunt (Tom Cruise). Somebody at Paramount must have figured this out, because Ghost Protocol and Rogue Nation have been outstanding.

Like Ghost Protocol, the main reason why Rogue Nation is so enjoyable was the emphasis on teamwork. What made the original television series so appealing was the teamwork aspect, and so far the last two movies have stuck to that formula. Instead of a movie focused purely on Ethan Hunt, it has it has a fantastic cast that make the franchise rather enjoyable. In addition to Cruise, Simon Pegg, Ving Rhames, and Jeremy Renner round out a cast that clearly has chemistry with each other. By allowing Pegg, Rhames, and Renner to be together for multiple films, it allows the audience to connect with their characters and grow attached to them, versus the disposable characters in the past.

A combination of a great cast, including a stand out performance by Rebecca Ferguson, great special effects, intense action sequences and incredible stunt work, lands  Rogue Nation demonstrates that the Mission Impossible franchise can only get better in the coming years.

There’s so much that can be said about this movie, but if you really want to appreciate this movie, sit down and watch it. For a indie British science fiction film, Ex Machina has little emphasis on special effects and more of a psychological mind bender. The writing and acting in the movie is outstanding, especially the performance of Alicia Vikander as Ava, the android with a highly advanced AI. Her performance alone is extraordinary, and worth seeing.

If you’re a fan of independent thriller movies, or want to experience a movie that’ll make you possibly think twice about the advancement of technology in today’s society. It also makes you question whether or not human beings are becoming robotic, especially when the android in the film has more human characteristics than the other two stars of the film.

Writing about it doesn’t do it justice in describing how much it screws with your mind. Just see it.

You know you’ve done something right when you leave a movie theater eagerly anticipating the sequel. One thing I can say about The Force Awakens is that as soon as I got out of my seat, I found that I couldn’t contain my excitement for what Episode VIII would bring.

Why couldn’t The Phantom Menace, or any of the prequels for that matter, have been that way?

I don’t hate the prequel trilogy, but The Force Awakens basically was everything I wanted in those movies. In fact, it’s much, much more. Where the prequels tried to be unique in their own way and distance itself from the original trilogy, The Force Awakens wasn’t afraid to embrace everything that made the original trilogy an iconic film franchise. The use of practical effects, in addition to outstanding special effects and great acting, helped make Star Wars a great cinematic experience once again. While there was some signature J.J. Abrams directing moments, such as a rotating camera and a quick zoom in-zoom out techniques, everything about the films felt in line with the originals and worthy of following up some of the greatest films of all time.

The blend of familiar faces (Han, Chewie, Leia, R2-D2, and C-3PO) and new ones (Rey, Finn, Kylo Ren, Poe Dameron, and BB-8) worked well for a film that’s clearly passing the torch to a new generation. Their presence helps the fans embrace the new characters as much as we appreciated the old ones, but they leave enough room to allow the performances of Daisy Ridley, John Boyega, and Oscar Isaac to take center stage, and they don’t disappoint. The new cast has a real chemistry with each other, and their dialog doesn’t sound robotic or wooden.

While I did get to experience the original trilogy on the big screen in the form of the Special Editions in 1997, I’d already seen the films on VHS prior to that, so there wasn’t as much impact on me. I also got to see all three prequels in the theaters opening weekend; they didn’t have that magic that I always heard about with the original trilogy. The Force Awakens left a me in awe and wonder to the point I was still thinking about the movie a couple of days after seeing it. Was this how others felt after seeing the original movie for the first time on the big screen? I’d like to think so.