I was one of the lucky ones to be able to catch Quentin Tarantino’s latest in a 70mm roadshow screening. The director specially outfitted select theaters around the country with the 70mm prints (something that hasn’t really been done in awhile, recently The Master, and only a few movies in history has been shot this way). The film opens everywhere in a few weeks, but will be edited from this original version. The 70mm version is around 25 minutes longer and includes an overture and intermission midway through the film. I have to say, that this really is the way to see this film.

Writer/director Quentin Tarantino is really old school all the way. No CGI, shot on big elaborate sets and always on film. Rumor is he will no longer make movies once digital filmmaking is the only thing around and film is a thing of the past. This is really too bad because there is no movie-going experience like that of a Tarantino flick. With only 8 films he has directed (either Kill Bill Vol 1 & 2 count as one ,or his Death Proof segment of Grindhouse he doesn’t count), he has become one of the greatest directors of all-time. While his films may not be for everyone, nobody can deny that they are extremely unique experience at the movies. There has already been a column written here on his dialogue alone so I won’t go too much into that aspect, but I will say that there is nobody else out there that can write a dialogue-driven film that makes three hours fly by.

Now to the film itself. The Hateful Eight isn’t exactly a throwback to the classic westerns that Tarantino typically raves about, such as The Good, the Bad, and the Ugly, but there are some great obvious nods to the westerns of yester-year. I love westerns, having grown up on most of the Clint Eastwood flicks, and it’s always a fun experience to see one on the big screen – even if those are few and far between nowadays. This is a Tarantino flick through and through and his dialogue is fantastic as always. He reigns in an immensely impressive cast with the likes of Samuel L. Jackson, Kurt Russell, Walton Goggins, Jennifer Jason Leigh, Tim Roth, Michael Madsen, Demian Bichir, and Bruce Dern. All but Bichir and Leigh have shown up in previous films by the director, as he really likes to stick with the actors who can recite his dialogue as gritty, gleeful poetry. While Jackson and Leigh get the real show-y performances, it is Walton Goggins (of Justified and Django Unchained) that really steals the show here. They haven’t really shown him in the trailers at all and I was glad to come into that character completely fresh. Next to Jackson and Christoph Waltz, Goggins is absolutely perfect at spewing out Tarantino’s dialogue and really gives the film a burst of energy and wit when needed. I know he won’t get any recognition for this film, but he really was the most impressive actor of the bunch here. Russell is also great here, doing his best and most brutal John Wayne impression, Bichir is on point along with a goofy Tim Roth and a fantastic Bruce Dern. There’s no real weak one in the bunch, but I would say that Michael Madsen’s character is given the least to do. 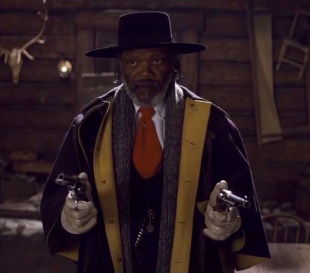 I don’t want to go too much into the plot because it was a lot of fun to watch it all play out, but I do want to touch on it. Kurt Russell’s John Ruth is transporting his bounty (Leigh) to Red Rock to hang and, because she’s worth $10,000 alive, he is paranoid about everyone he comes across. Soon enough he picks up Jackson’s Warren and Goggins’ Mannix (who claims to be the new sheriff of Red Rock). During a heavy snow storm, they are forced to seek shelter at Minnie’s Haberdashery where Ruth finds the rest of our cast holding out. He suspects that one of them is working with his prisoner in order to escape. What ensues is a verbal cat-and-mouse/whodunit plot that is both fun and intense, giving each actor their time to shine.

When you go to see a Quentin Tarantino movie, you expect a decent amount of violence. While a lot of the violence in his early years was off screen (Reservoir Dogs and Pulp Fiction especially), he has recently put the violence right in your face with his last two films. While this didn’t bother me as much with Django, I do feel that The Hateful Eight is easily his most brutal film and not necessarily for the squeamish. Some of the violence is played for laughs, but the film really ends in what is almost literally a bloodbath, and the violence put upon Leigh’s character by John Ruth will upset some people (especially since her crimes are never really explained). I also want to note that most of the violence is met with laughter or glee by the characters in the film and nobody seems to be at all affected by it(although there are a few times you may laugh yourself, depending on how you feel about the character of Daisy). This will not be for everyone, but if you know you can handle some real brutal violence, then it shouldn’t put you off. 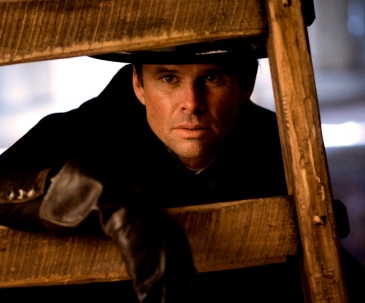 While the film is overly violent, it is also a great time at the movies. The film flew by for me once we got to intermission, and all of the real action and payoff happens after that. If you were to ask me how long I thought it was, I would maybe say two hours. I know this won’t be everyone’s experience, but for such a dialogue-driven film…it really doesn’t feel like I sat there for 187 minutes. If you are able to see it in the 70mm Roadshow screenings somewhere around you, DO IT! If you like Tarantino flicks, I don’t really have to convince you to see this film, most of you have probably already made up your minds about it as it is.