If there’s one thing that the phenomenon of Star Wars has captured so brilliantly, it is a grand universal scale and size. The weight of these imaginative worlds coming together and their conflicts has always been massive, and the mythology of the force, the Jedi and the constant battle between the dark side and the light takes this beyond a war and into the realm of epic fantasy. Above all else, Star Wars is the definition of a cinematic epic.

This is why I adore J.J. Abrams addition to this universe, with “Star Wars – Episode VII: The Force Awakens.” Unlike the prequels, this film feels massive, covering not only vast distances of space, but also time and the legacy of both good and bad people. This film is not just an excuse to show flashy effects and have lots of fights, in fact there is very little of that in this film, but to tell a tale that we’re all familiar with and in a new way.

Set roughly 30 years after the events of “Return Of The Jedi,” the remains of the Galactic Empire have now reformed into the First Order, still bent on ruling the galaxy and eliminating anyone who stands in their way, including the Rebellion. The greatest weapon of the rebels, Luke Skywalker, the last Jedi, has disappeared. But when a map to the location of Luke has been discovered, it becomes a race between the Rebellion’s best pilot, Poe Dameron (Oscar Issac) with his droid-buddy BB-8, and the First Order, led by the dark force user Kylo Ren (Adam Driver), to find Luke.

Along the way, we meet new players like Rey (Daisy Ridley), a young scavenger stranded on the planet Jakku, filled with decaying Star-Destroyers and relics of a war fought decades ago. Rey struggles every day to make ends meet, stealing parts from the broken-down ships and using those to buy food, always looking to the horizon as if she is waiting for someone.

Another new character is Finn (John Boyega), or FN-2187 for short. Finn is a Storm Trooper, having been trained his entire life to become a ruthless killer. But after witnessing the atrocities that the First Order is capable of, Finn takes the first opportunity he can to run and get away from the grasp of these savages.

Through a strange set of circumstances, Rey, Finn and BB-8 end up on an adventure that takes them through the heart of the galaxy, as they fight off the First Order and meet some old friends.

If there’s one thing I loved the most about “The Force Awakens,” it was the characters. Every new character that was introduced is lovable, sympathetic, or fun to be around. Finn was an especially great addition, as he often brought the comedy up and offered a neat perspective on the villains, that not all of them are evil and wish to make a difference in the universe. This is the kind of guy who loves exploring these planets while still enjoying the thrill of the hunt, especially when it involves destroying TIE-Fighters.

BB-8 is the cutest film character since WALL-E. Little to no CGI was used with this guy, as he rolls around like a soccer ball that somehow became sentient. Yet he is still so expressive, like when he gets lost in the deserts of the Jakku, afraid that he might never find his master again. BB-8 even gives a thumbs up at one point, despite not having any fingers or arms, so he gets points for being creative.

Rey, as previously mentioned, has been stranded on a desert planet since she was a little girl, but has fought and scrapped her way through it all. She is certainly more tragic, as she clings to the hope that whoever it is she’s waiting for will return soon, but in her more quiet moments, she seems upset as if she knows the truth. One of the first scenes with her shows a massive wall of tally marks, to show how many days it has been since she was left here. The screen could not even show the full size of those tallies.

Like Luke in “A New Hope,” Rey is stuck in this wasteland, but is fully aware of the galaxy around her. She strives to make something more than the life she has, and jumps at the first opportunity to try something different – even if that means getting involved in a galactic war.

Finally, we have our new villain – Kylo Ren. It is difficult to talk about this guy without spoilers, but let’s just say that he is conflicted between the dark side and the light. He is bound to the First Order, despite what he may wish, and is looked down upon by his master for not being as strong as he can be. He aspires to greatness, taking it upon himself to keep the legacy of Darth Vader alive. Ren idolizes Vader, but only as a sign of strength and loyalty to the dark side, unaware of what we know about him (yes, I’m saying that is a positive of the prequels, though I can’t think of many others).

Without giving too much away, Kylo Ren is a sympathetic villain that sees the sides of the Rebellion and the First Order, but can’t do anymore than what he is told to do.

To be honest, there was not a single character that I hated in “The Force Awakens.” Every new character was a wonderful addition, they all had chemistry that made them work well off one another, and they gelled fantastically with the returning characters, especially Han Solo (Harrison Ford). Each of these characters has a distinct relationship with Han – Rey knows how the Millennium Falcon works without being told how, and Han can tell Finn is hiding something but trusts his intentions. 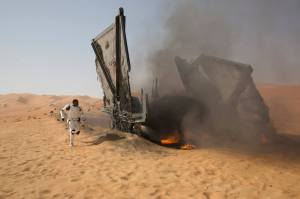 Han Solo was always that necessary character in the Star Wars films that made the universe feel so expansive, that not every human had a connection to the force. Han always thought it was a stupid religion and was all superstitions, until he was proven otherwise. In “The Force Awakens,” we see a man who has been through hell and back, and wouldn’t mind doing it all one more time.

Some similarities have been drawn between “The Force Awakens” and “A New Hope,” and I do think these similarities are unavoidable, but every time this film does something like they did in Episode IV, they add just enough new elements that it is forgivable. The two film are similar, but not identical.

These new elements, like these characters, their relationships with one another, the mystique of the First Order while still keeping the size of the Empire, give “The Force Awakens” is own unique atmosphere and vibe that is unlike any other Star Wars film. It is fun without losing its edge. The film can easily switch between an action-packed sequence of the Millennium Falcon begin chased by TIE-Fighters through a Star Destroyer half-buried in sand, and funny moments with BB-8 and Finn being unfamiliar with such an old ship.

Yet it never stopped feeling like Star Wars. I don’t know if it was because of the sound effects, John Williams’ score, the return of classic characters, the mythos of this universe or a combination of all these, but this felt like the logical continuation of this story – a more personal tale of how both light and darkness is reborn after so much destruction.

Like the great Star Wars films before it, “The Force Awakens” tells its story through visuals and not words. Many of the early scenes have little to no dialogue, especially the ones with Rey. So much it explained without ever saying anything, like the destruction of the Empire on Jakku and the world these scavengers now live in. “The Force Awakens” understands the power that cinema can have through the use of editing, juxtaposition and atmosphere.

“Star Wars: Episode VII – The Force Awakens” is the most fun I’ve had in theaters since “The Avengers.” J.J. Abrams has created a work that not only honors the legacy started by George Lucas, but adds on to it. Each sequence stands on its own and there were so many moments that made me want to get out of my seat and cheer. It perfectly captures the size and scope of the Star Wars universe while making our connection to these characters feel more personal.