Within the first five minutes of the most recent adaptation of Mary Shelley’s “Frankenstein,” the mad doctor has removed Igor’s hump, has him in a walking brace and helping his master use Star Trek-like techno-babble to reanimate the dead.

If that doesn’t turn you away from “Victor Frankenstein,” then you will probably enjoy this film. If you think this film is straying far too much from the source material, like me, then you are in for a long and irritating ride.

The problem with “Victor Frankenstein” is that the film cannot make up its mind on whether it wants to portray its protagonist as a hero, villain, anti-hero or something in between. He helps turn Igor into a civilized man, but he does that without asking Igor if he wanted this and keeps hammering this into Igor’s mind throughout the film, as if he created him. 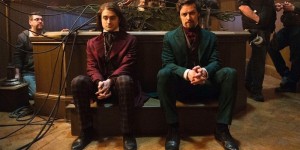 In fact, they use that line several times throughout the film, “I created you.” No, Doctor Frankenstein did not create Igor. He saved Igor from being treated unfairly at the circus, and took him to a rundown factory where he would be treated unfairly and hunted by the police. I get that Frankenstein is egotistical, you have to be when you attempt to bring the dead back to life. But this is a man who continually ruins the lives of perfectly good people, while parading around town like he’s a good but misunderstood man.

There is an attempt to give him a presence similar to that of Benedict Cumberbatch’s Sherlock Holmes – an intelligent gentleman who lacks social skills but is ultimately trying to do the right thing. That’s all well and good, but when you have your main character killing people who get in his way while he attempts to reanimate corpses, that attitude can turn your hero into a terrible person.

This certainly is not helped by James McAvoy’s performance as Victor Frankenstein, as he screams nearly every line at the top of his lungs and we watch every drop of spit come flying out of his mouth. McAvoy’s performance takes scenery chewing to a whole new level. I was afraid McAvoy was going to jump out of the screen and attack us for not loving his performance.

If there is one redeeming quality to “Victor Frankenstein” it would the other similarity to “Sherlock” – actor Andrew Scott (who played Moriarty in the show) as the inspector in charge of tracking down Frankenstein. His character is given several other cases throughout the film and is told to stop the hunt for the doctor, but he never stops, always with the same intensity in his eyes. As if the inspector takes offense to what Frankenstein is doing, much like the audience takes offense to this film.

As the film progresses, we find out about the inspectors past and his devotion to Christianity. He believes in his religion above all else, and what Frankenstein is doing here goes against everything he stands for. Some might say this is someone so blinded by religion that he can’t see progress, but this is a man who comes from a tragic background and is desperate to make sure more lives are not ruined like his.

Scott plays the role like someone who is confused by all of this, unsure what to do and how to stop of, but will not waste a moment until this offense is dealt with. The film portrays the inspector as the villain, but I was far more sympathetic to him than I was for Frankenstein or Igor. The only shining point in an otherwise unworthy film.

Overall, “Victory Frankenstein” is far more concerned with current trends of shows and movies, like the sociopathic Sherlock Holmes and tragic-yet-comedic movies, that it so far removed from Mary Shelley’s vision.