This one is probably my most controversial pick on the list. It is widely regarded as one of the worst Bond films, mostly due to the fact that so many people did not like Pierce Brosnan as Bond. However, this is one that I find myself going back to again and again. It’s easily the franchise’s most action packed and fast-paced. Even the scene where Bond gets the details of his mission is on the go while M, Moneypenny, and Bond ride in a car to the airport. Tomorrow Never Dies is slickly directed and delivers on most fronts. The only real problem I had with this one is the Bond girl (luckily given little screen time). 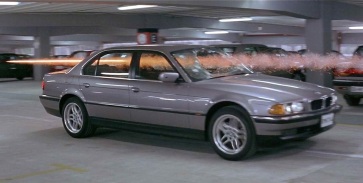 One of the top 5 car chases of the series

This one is the follow up to Brosnan’s introduction in Goldeneye and successfully carries over the tone; perfectly mixing the impressive action and stunts of the Connery/Dalton age and the witty charm of the Moore age (without going over the top). The opening scene alone is fantastic and showcases exactly the tone I’m speaking of. I literally just tried to describe it here, but it does it no justice. The action sequences throughout the movie are all top-notch. From the opening sequence to the car chase where Bond drives from the back seat, to the motorcycle vs. helicopter chase with Bond & Wai Lin handcuffed together, to the final raid on Carver’s stealth boat – they are all fantastic.

Bond’s adversaries here are also quite good. Jonathan Pryce always plays a great, smarmy bad guy and Gotz Otto makes a fun and imposing henchman that gets a fantastic death scene that really puts the Bond theme to good use. Michelle Yeoh makes a good pairing for Bond, showing her physical superiority over him as she takes on a number of bad guys by herself. While I didn’t buy their romantic chemistry, I bought less the chemistry between Brosnan and Teri Hatcher, who plays one of Bond’s old flames, now married to Pryce’s Carver. Her acting isn’t exactly on point here, making me believe she was hired solely for her looks (they could have at least dubbed her like they did in the Connery days).

As for the plot, it’s both straightforward and complicated. Carver is a media mogul who hires Gotz Otto’s Stamper to cause international incidents in order to report on it first and get high ratings. He’s planning on having the sole rights to all of the coverage of the “World War III” he is trying to create. I don’t really get it and it’s probably because I never paid much attention to the actual plot. It doesn’t really matter though in order to enjoy this one. There’s a chainsaw torpedo! 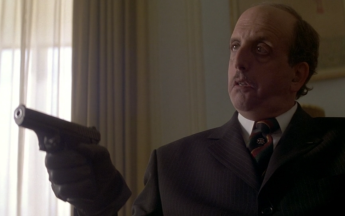 Pierce Brosnan is also on point here as well, he really seems to be having a lot of fun (especially during the car chase) and also sells the more dramatic moments very well (see the Dr. Kaufman scene). Vincent Schiavelli is especially fantastic in that latter scene,
giving such a minor character depth and humor in what is basically a cameo. Overall, I think Tomorrow Never Dies is a ton of fun. Good characters, amazing stunts, and a truly action-packed entry in the Bond franchise. If you didn’t like it when you first saw it, go back and give it another shot.