James Bond: From Worst to Best – For Your Eyes Only

For Your Eyes Only

This is the one that got Roger Moore’s Bond back on track for a brief moment before Octopussy and A View to a Kill. It’s kind of funny that this is widely considered to be Moore’s “serious” Bond film because other than one choice scene (that Moore did not want to do in the first place), it’s a fairly typical one for him. The scene Moore was unhappy with is probably one of his best and what I most associate this film with. Bond has hunted down one of the main hitmen and his car has veered off the road, leaning off the edge of the cliff. Originally, Moore wanted to throw a small pin (which he previously took off the villain) into the car, therefore being too much extra weight, causing it to slide off the cliff. The director thought it would be more effective if Bond gave the car a push off the cliff with his boot. Thankfully they went with the latter, because it’s a very well done scene and shows an edge to Moore’s Bond we hadn’t seen before (and would never see again). It’s a powerful image for the series and Moore plays it perfectly.

As for the film itself it is pretty great. Aside from the young girl throwing herself at a nearly geriatric Bond and an unnecessary hockey sequence, this is a great Bond movie. It’s got everything it needs – a fun and exciting opening sequence, good theme song, exciting set pieces, and some good Roger Moore charm. I also spotted a young Charles Dance, of Game of Thrones and Last Action Hero fame, as one of the villain’s henchmen during the ski sequence. Nearly any time they get Bond up in the mountains, you are in for a good time; OHMSS, The Spy Who Loved Me, SPECTRE all have fairly spectacular sequences. This one is no exception. This one features Bond being chased by men on motorcycles with spiked tires and hunting rifles. All Bond has is his skis and his Walther PPK. It’s an incredibly well shot and tense sequence. 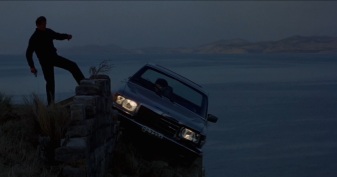 Of course, this is a Roger Moore flick and is definitely not without it’s sense of humor. One of my favorite gags in the series actually comes from this entry. Moore and his Bond girl, Carole Bouquet, are escaping from some henchmen when they see them tampering with Bond’s car. What happens next is one of the most satisfying, over-the-top anti-theft systems ever…and I love it. Moore plays the scene quite brilliantly as well, it always brings a smile to my face. For Your Eyes Only is seen as one of the more serious entries in the Bond canon, but it really is a ton of fun.