James Bond: From Worst to Best – The Man with the Golden Gun

The Man with the Golden Gun

Sorry, Roger Moore. I like you but you had a very, very rough start. After his first portrayal as Bond in Live & Let Die, Moore followed it up with another stinker that had a lot of promise. Christopher Lee was cast as the villain, a master-class assassin with, you guessed it, a golden gun. Seems like it can’t miss. Unfortunately, director Guy Hamilton didn’t correct any of the mistakes he made in the previous film. Again, we meet Sheriff J.W. Pepper in another extended chase scene that’s just as annoying as the last time he showed up. Other than the infamous corkscrew jump (which is absurdly ruined by the sound effect used in the scene) and a fun face-off between Bond and Christopher Lee, this is another unfortunately rather boring entry in the series. Other than these two films, the absolute least Bond can give us is a fun two hours in the movies. 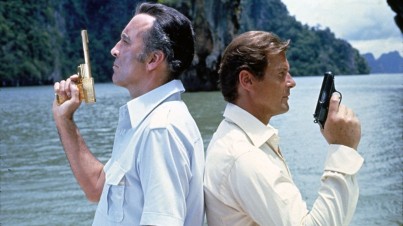 The Man with the Golden Gun is somewhat memorable due to Lee and his golden pistol, his literally little sidekick Nick-Nack, and for the corkscrew stunt. Other than that, even I can’t remember much about the film. Britt Eklund was the Bond girl, I remember that…and I remember how annoying Sheriff Pepper was again. It’s a good thing this is the last run-in we have with him. Again, I don’t want to spend much time on the bad movies, so I will just leave you with this. When the opening line of a film is “Nick Nack! Tabasco!”…you know you’re in for a rough ride.

Tagged as: james bond, Kyal, SPECTRE, the man with the golden gun