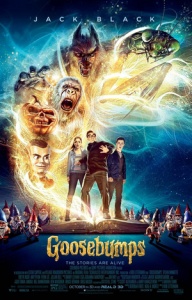 Let it be known that I have never read a single Goosebumps book, nor have I watched a full episode of the television show. As a kid, the concept did not interest me, as I hated being scared as a kid. I was your typical fraidey-cat that liked to play everything safe. Which is why I watched lots of Godzilla films instead.

But as I’ve grown older, I began to appreciate shows like “The Twilight Zone” and how an anthology horror/sci-fi show could have some of the best writing self-sustained writing on all of television. This made me rethink shows like “Tales From The Crypt,” “The Outer Limits,” “Are You Afraid Of The Dark?” and of course “Goosebumps.”

The difference with the last one is that episodes were based off already established novels by R.L. Stine. Though “The Twilight Zone” and “Tale From The Crypt” would occasionally delve into adaptations, this was “Goosebumps” bread-and-butter.

My point is this – While most people are attending the movie adaptation of “Goosebumps” for nostalgic reasons, whether they read the books or watched the show (or both), I have no ties to R.L. Stine’s work.

So why did I watch this Jack Black family friendly-friendly horror-comedy when I could have gone to see “The Martian”? Well, one, I couldn’t work any other film into my schedule. Two, the trailer was enticing. A hodgepodge of R.L. Stine’s work as they attack a small town, with Jack Black playing the creator of all these books sounds like a film that could be a lot of fun. If there was ever going to be a movie adaptation of Stine’s work, without focusing on just one book, this is how you would please every fan of the books – by including everything.

In the town of Madison, Delaware, a young family has just moved from New York City so that the mother may pursue a new career opportunity at the local high school. Her son, Zach (Dylan Minnette), doesn’t seem to get along with anyone until he meets his next door neighbor, Hannah (Odeya Rush), though their meeting is cut short by Hannah’s father (Jack Black). After her father forbids her from seeing Zach again and locking her away, Zach attempts to break her out, only to find a wall of Goosebumps manuscripts, each with a lock on them. Things only get stranger when he opens the lock and a Yeti breaks free. 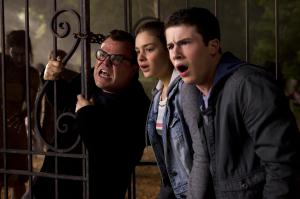 When I walked away from “Goosebumps,” I thought about how most of the jokes fell flat and that it was not scary without resorting to jump scares. This soured my experience of the film, until I realized that if it were truly a horror film, it could have gone full-blown horror by making R.L. Stine creepy instead of a shut-in goof that means well. The same can be said for the comedy aspect by making the villain of the film, Slappy the ventriloquist dummy (voiced by Jack Black), less psychopathic and more of a wise-cracker.

“Goosebumps” wanted to find a middle ground between horror and comedy, while still appealing to those that liked R.L. Stine’s work, and still be something that kids could enjoy. In this case, I think the film nailed that aspect perfectly. This is all tied together by Jack Black’s performance.

Black’s portrayal of R.L. Stine feels like a combination of his roles in “School Of Rock” and “King Kong.” He has his subtle and quiet moments where he resents the path his life has taken, but these could be followed by scenes of tremendous outburst where he screams at the top of mountain for his love of writing. In the end, he comes across as a man who does not quite understand the gift he has been given, nor does he know where he got it, but that he accepts full responsibility for these monsters.

That even though he created these creatures, he refuses to turn into one. To be consumed by them.

However, the writing of other characters outside of R.L. Stine ranges from annoying to cliché. The main character, Zach, lacks any sort of personality that makes him stand out from your average teenager. He lost his father for some unknown reason and shuts his mother out of his life, like most teenagers do. His aunt is always looking for a new ex-husband and doesn’t seem to care for her family, but feels obligated to be near them. It comes across like she’d rather be bedazziling something or chasing after men while making terrible jokes.

But the worst culprit is Zach’s “best friend” Champ (short for Champion). First of all, it is clear that no one likes being around him, including Zach. His goal in the film seems to be whining and pointing out the obvious about the monsters they meet, but never being the one to do anything about it. No one invited Champ to be here (Zach only needed help rescuing Hannah, and he didn’t even do that), he is not the one to come up with a plan to stop the monsters and does not contribute to their plans at stopping them. Champ is a pointless character.

Overall, when “Goosebumps” focuses on the monsters, the film is captivating and it is neat to see the variety of these abominations. The effects are decent enough so that you’re not questioning whether these monsters are real or not, but nothing too spectacular. The story is fairly weak though and the characters are not intriguing in the slightest, outside of R.L. Stine. This is a good family-friendly monster film that was not a waste of time.