We finally have our first appearance of Alfred Hitchcock.

I have never watched a film where the Master of Suspense has yet to disappoint. Hitchcock’s films are often basic and simple in terms of plot, but rich and eccentric in character and charm. His films are so often visually impressive that you wonder how he was able to pull off many of these shots in the 1940s and 1950s. Hitchcock took inspiration from the German expressionist film movement, with movies like “The Cabinet Of Dr. Caligari” and “Metropolis” giving him ideas on lighting and use of shadows.

Even the films by Hitchcock that I do not care for, like “Dial ‘M’ For Murder” and “Rope,” still find ways to be visually stunning and have suspenseful moments.

Alfred Hitchcock knew how to make take the audiences’ fears, turn them loose and photograph it insanely well. I can honestly say that no one makes a film like Hitchcock.

With that said, there are many movies of his that I adore. The extravagant “North By Northwest” was my introduction to Hitchcock, while “Psycho” is always a nerve-wracking piece of horror. One of my personal favorites is “Shadow Of A Doubt,” which was one of the first films Hitchcock made after moving from England to Hollywood, and Hitchcock often said it was his favorite of all the films he made.

But in terms of edge-of-your-seat tension, and teeth-clattering suspense, there is nothing better than “Strangers On A Train.” This is Hitchcock at his most manacle and unforgiving. Though he had made suspenseful movies before this, “Strangers On A Train” amps it up to levels I’ve never seen before, all paying off in the most satisfying conclusion to any of his films.

While on a normal train ride, two unsuspecting strangers meet – the tennis player Guy Haines (Farley Granger) and the odd Bruno Anthony (Robert Walker) who is full of “interesting” ideas. The two talk over lunch, though Bruno does most of the talking, as he pries into Guy’s personal life, especially his romance with Ann Morton (Ruth Roman), the daughter of a senator, and how Guy is attempting to file for divorce with his wife Miriam (Laura Elliot). But Bruno begins to concoct a new idea about how to solve Guy’s problem with Miriam and Bruno’s aggression towards his father – the two swap murders, that way no one will suspect a total stranger as the murderer.

Guy humors Bruno’s ideas, but Bruno takes it as approval. After a rough meeting between Miriam and Guy, where Miriam says she refuses to divorce Guy and will forbid him from seeing Ann, Guy is so furious that accidentally calls Bruno and hangs up without saying anything. This is all Bruno needs to set his plan into motion.

The wonderful thing about suspense is that a movie can build it up from the very first shot, and continue building it up throughout the entire film. It is like pulling a rubber band – you want to see how far it’ll stretch and how tiny the band can get before it snaps. Perhaps you apply too much force and the rubber band goes flying out of your fingers, meaning you have to start all over again. You don’t know when it will snap or how much tension you must apply to it before everything unravels.

But it does not mean anything if you don’t see the rubber band snap. That is something Hitchcock understood and gave us in full force in “Strangers On A Train.”

The first shots of the film are of our main characters shoes, as we see the eccentric feet of Bruno and the plain travel shoes of Guy. We don’t see their faces until they meet each other. This way these characters are as much a stranger to us as they are to each other. We watch as Bruno slowly reveals everything personal about Guy’s life, so that when Guy gets uncomfortable, we are right there with him. None should know this much information about someone they’ve never met, yet Bruno knows more than most and has some interesting ideas about “harnessing life energy” and being able to smell a flower on Mars.

This is sold to us through Robert Walker’s performance that feels off-kilter. Bruno is someone who sees aggression in everything and anyone. He talks to a few elderly party guests about how everyone has wanted to murder another person at some point in their lives, but we know that he had the guts to go through with it. He is barbaric, yet sophisticated enough to know when to keep his mouth shut.

Just ONE of your ideas for a murder, Bruno?

But worst of all, Bruno is persistent. Once he has gotten Guy’s attention, even for just a moment, Bruno refuses to let go. You lock eyes with him, you must expect a speech about the best tools to murder a man. He will pursue his target for as long as he needs to, all with a creepy unnerving presence that says, “You will do what I say.”

By the way he looks at someone, you can’t be too sure if he is going to murder you or if he is only thinking about it.

Given Bruno’s attitude towards other people, this leads to many dangerous scenes. Starting with the first time Bruno meets Miriam as she heads out to the town fair, he demonstrates his strength by breaking one of the games, and continues to follow Miriam on every ride she and her dates go on.

Bruno even takes a moment to buy popcorn, as if he is watching a film unfold.

Some of the craziest scenes in “Strangers On A Train,” are enhanced by the cinematography, which plays to Hitchcock’s strengths of shadows and absurdities. In one shot, Miriam and her dates are driving a boat through a cave, with Bruno right behind them. All we see are the shadows on the wall, as Bruno’s shadow gets bigger and closer to the other boat and he slowly raises his hands up as if he is going to strangle her.

In the following shot, we hear Miriam scream.

Another intensely creepy shot is when Guy thinks he has lost Bruno in the country club, attempting to play a round of tennis. But as he looks into the crowd, Guy notices every head following the ball back and forth, except for one – Bruno, staring directly at him.

I’m convinced Hitchcock made Guy a tennis player simply so he could use that shot.

All of these magnificent shots heighten the tension even further, as we watch that rubber band slowly be tighter and thinner. But, to me, suspense means so much more if it actually pays off in a satisfying climax. The problem with other thrillers is that they’ll have tense sequences, but it does not amount to me, mostly talking about what the characters learned while being at gun point. 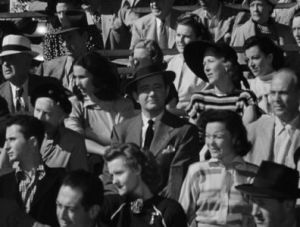 With “Strangers On A Train,” everything the film has built up to comes together when Bruno and Guy meet face-to-face at the town fair and have a fist fight on the merry-go-round. A police officer accidentally shots the ride operator, causing the wheel to spin uncontrollably, getting faster every minute. We watch as the two duke it out, while people stuck on the ride scream to be let off the ride and to be left out of the fight.

For once, the climatic moment in a thriller matches the suspense that it has built up, as we watch the world around these two spin out of control. Not only is this ending exciting, but it is satisfying. That rubber band has not only broke, but it exploded.

“Strangers On A Train” is Alfred Hitchcock at his most suspenseful. It takes full advantage of the strange set-up, and makes it seem almost plausible with the eccentric Bruno and weak-minded Guy. The cinematography enhances the tense moments to the point that you’re sure Bruno is everywhere. This is one of the most exciting thrillers I have ever seen and always gets my heart racing.