James Stewart and John Wayne in a film directed by John Ford. Best screen combination ever.

Leading up to this little known western, “The Man Who Shot Liberty Valance,” both Stewart and Wayne had developed an outstanding body of work in their respective genres. Stewart was the every-man in many screwball comedies like “The Philadelphia Story,” or helping Frank Capra make poignant emotional pieces, as we’ve seen previously with “Mr. Smith Goes To Washington.” Wayne, however, was Mr. Western. He was known to “react, not act,” which lead him to become a leading man who felt the same in life as he did on screen – what you see is what you get.

Both were beloved and respected by nearly everyone, but for entirely different reasons. Wayne and Stewart had their share of similarities, such as their drive and dedication to cinema and their overwhelming screen presence, but besides that these two are night and day. They came from different schools of acting, they played contrasting roles and it seemed like they lived on two different planets.

After the end of World War II, James Stewart entered in a new film contract. Previously, he had been stuck in the same types of roles where he played kind but passionate men, and he wanted to change that image. This led him to make four movies with Alfred Hitchcock, a slew of westerns, and roles where he would play more stern and dominate characters, like in “The Flight Of The Phoenix.”

One of these films was “The Man Who Shot Liberty Valance,” which allowed him to work with the iconic filmmaker John Ford, who popularized the Western genre. Basically, any major Hollywood western that came out between 1939 and the late 1950s was directed by Ford, including “Stagecoach,” “My Darling Clementine,” “Fort Apache,” “The Grapes Of Wrath,” “Rio Grande” and “The Searchers,” and almost all of them starred John Wayne. Ford was also known for influencing countless filmmakers, including Orson Welles, Martin Scorsese, Steven Speilberg and Akira Kursoawa.

Ford is the binding agent that holds Stewart and Wayne together, by bringing their contrasting styles and personalities together, to give us a western that is both bittersweet yet satisfying, as we watch the old west fade away and give birth to modern civilization.

Senator Ransom Stoddard (Stewart) has just arrived in the growing town of Shinbone, to attend the funeral of an old friend, Tom Doniphon (Wayne). The local paper is intrigued by this, so Stoddard reflects on his young adventure from decades ago, as a young Stoddard arrives in Shinbone by Stagecoach and is attacked by the town’s biggest threat – Liberty Valance (Lee Marvin). Stoddard insists on using law and order to put Valance behind bars for his crimes, much to the laughter of Doniphon, who says the only way to deal with Valance is with a gun. 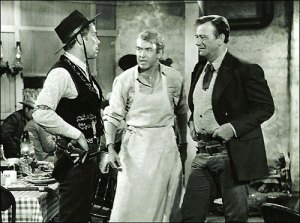 Aside from Stewart and Wayne in this film, “The Man Who Shot Liberty Valance” has a massive all-star cast, all of which turn in a stellar performance – Vera Miles, the previously mentioned Lee Marvin, Edmond O’Brien, Andy Devine, John Carradine and even a young Lee Van Cleef.

What stands out about “The Man Who Shot Liberty Valance” is how different it feels from any other John Ford western. In films like “Stagecoach” and “The Searchers,” there is a distinct feeling of the outdoors and vast landscape of the west. But “The Man Who Shot Liberty Valance” feels enclosed and trapped. Part of this is because most these scenes take place either indoors or on a sound stage, instead of a western town built outside.

Normally, this would be a bad thing for a western, as it would make the film feel artificial and remove the feeling of braving a vast frontier. But in this film, it plays to the themes of the west dying. That there is only so much room for this old way of life to move that it is beginning to suffocate. 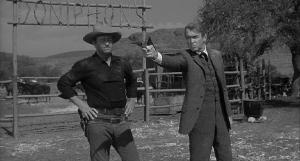 Ultimately, “The Man Who Shot Liberty Valance” is about the lawless western lifestyle against the sophisticated and orderly eastern way of living clashing, with James Stewart representing the east and John Wayne doing what he always does for the west. Stoddard is literate, educated, wishes to pass this knowledge onto everyone else, and is against violence, preferring to use justice to solve those problems. But now he lives in a world that doesn’t understand justice or law and order, where whoever has the fastest gun is top dog and the local sheriff sleeps in the only jail cell.

Doniphon insists to Stoddard that Liberty Valance will kill him unless he either leaves town or learns to use a gun, but Stoddard firmly believes in law and order that he is willing to lay down is own life to protect it. The sheriff won’t protect Stoddard, and Doniphon keeps his strength hidden until he absolutely has to use it.

Liberty Valance stands in the middle of this, as he represents the tyranny of the old west. Everyone in Shinbone is afraid to him, and petrified to stop him from his continued antics. The only one who could is Doniphon, but he is too focused on getting the girl of his dreams, Hallie (Vera Miles). He is building an extension to his house to give Hallie a place to live once he proposes to her. The problem is that Stoddard offers Hallie something new – education. 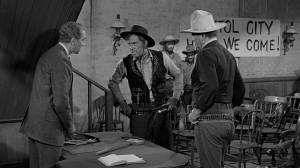 So does Doniphon let Liberty Valance take care of Stoddard and secure Hallie as his girl? Or make sure that Hallie leads a happier more educated life with Stoddard, sacrificing his own happiness?

I’ve talked about this in a previous editorial, but “The Man Who Shot Liberty Valance” is one of the best examples of a fascinating genre – the death of the old west. We all knew this would happen, that the days of cowboys and hired gunmen would give way to courts, towns and civilization. The heroes of the west would die as the railroad advanced, and riding off into the sunset was no longer an option.

We watch as society slowly creeps into this film, but only so slightly that it doesn’t seem out-of-place. Newspapers have become a great way of getting information around the territory, town meetings are held with no alcohol being served, education and schools are popping up to people of all ages, and statehood is discussed.

It wouldn’t be too long until the untamed west would be cultivated into a beautiful garden.

Yet, at the same time, the east is given enough to learn from the west. Stoddard does have to defend himself against Liberty Valance, and ends up being known as “the man who shot Liberty Valance.” In fact, he ends being elected as a Senator because of that title.

This leads to one of the best lines in the film, said by the editor-and-chief of the paper to Stoddard years in the future, “This is the west, sir. When the legend becomes fact, print the legend.”

“The Man Who Shot Liberty Valance” not only has one of the best screen pairings with Stewart and Wayne, but gives us a look at the old west that is not often observed. This feels like the west is deteriorating and we see what happens to those old cowboys. We’d like to think they hang up their spurs, but now we see their sadness and sacrifice, to make a better world. 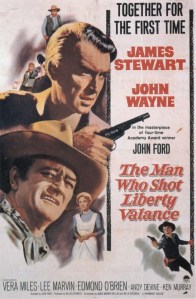