Horror is a hard concept to grasp for filmmakers. Most seem to understand one aspect – capturing what scares them. But outside of that, some filmmakers believe that it is sudden jump attacks that come out of no where that scare audiences, along with copious amounts of blood and guts.

But horror, true horror anyway, comes from our own imagination. It comes from not understanding how the horror works, and not seeing the full picture. And then letting our imagination fill in the gaps. We attempt to create truth when confronted with the unknown.

Were there really ghosts in “The Haunting”? Or was it just the old house falling apart? If there were ghosts, what are the limits of their powers? Could they have really influenced everything from the start? These questions are never answered in “The Haunting,” and it makes the film much more powerful, memorable and terrifying because of that.

But my personal favorite horror film remains to be one that terrified me from the first frame to the last – John Carpenter’s 1982 movie “The Thing.” A remake (of sorts) of Howard Hawks 1951 “The Thing From Another World,” it is one of the many films to adapt the now-famous short story “Who Goes There?” about an arctic research team that stumbles across an alien in the ice, which then comes to life and stalks the team.

What “The Thing” offers that the other adaptations lack though is atmosphere, logic and true horror.

I recently watched “The Thing From Another World,” and found myself unable to get invested in any of the characters. There were some moronic scientists who believed that they could communicate with the alien, and attempt to make peace with it, even though it was clear that the alien does not understand English and wants to kill everyone.

But one big difference in “The Thing” is that the alien does not want to kill anyone. The alien is the first character that we’re introduced to, and it is not until half and hour in that someone dies – and the alien does it out of self-defense.

This thing is just interested in surviving. It is intelligent, and seems to cut off the research team at every point. The group thinks of a way to find the alien’s location, the plan is sabotaged. Parts of its body is roasted by a flamethrower, it uses this time to sneak away and reform. The survivors plan to wait it out, it turns off the power to the base and intends to freeze up again until rescue arrives.

The most terrifying part about this creäture though? It is a shape-shifter. It assimilates other living creatures at a cellular level, destroying the host in the process, and can turn into a perfect imitation of the host. Each cell of this thing is its own individual and will react if provoked enough. All it needs is one cell to become you and want to make more people into the thing.

It is a smart, calculating and patient monster that can be anyone or anything.

On top of this, the cast of “The Thing” is just as smart and logical as the alien, if not very paranoid. And really, who can blame them? There is a good chance that everyone you work with has been turned into a virus that wants to devour you and make you apart of their being.

“If I was an imitation, a perfect imitation, how could you tell the difference?”

You certainly cannot trust anyone. But there are obviously more than a few humans left, as our hero MacReady (Kurt Russell) points out. If there was just him, they would all have attacked him, because they have nothing left to hide at that point. This creäture may be intelligent, but it is vulnerable and needs a place to hide.

Unlike many of the other adaptations of “Who Goes There?,” these stranded men do not over think anything or attempt some bizarre way out of the situation. They are often controlled by their emotions and fear, but are not afraid to lay down their lives for the rest of humanity. All they have is their wit, individuality and some flamethrowers. 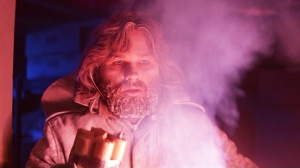 When Blair (Wilford Brimley) runs a computer simulation of the alien, he finds out that if it ever made it to civilization, it could infect all of humanity within 27,000 hours. So, in an attempt to make sure it never gets there, Blair disables the helicopter, snow-runners, the radio and is prepared to kill everyone in the station.

He knows the risks and is prepared to sacrifice himself, which by the end of the film, the survivors agree is the right thing to do.

Or perhaps Blair was infected from near the beginning of the film, and the alien did all that as a calculated risk to make sure that it could survive, while the others could not? That is certainly up to interpretation.

In fact, most of “The Thing” is left up to interpretation. What really is the aliens’ motive? What is the best way to go about that? Why is it being so calculating about who it infects? For those that it does infect, when was it able to do that?

That is the problem – it is an alien. This thing is a foreign entity that does not operate on the same basic desires as anything on this planet. We don’t know if it wants to eat us or use us for some other purpose. We can only guess.

One last aspect worth mentioning is the setting – Antarctica. This adds so much to the feel of isolation and paranoia. To know that, even if you manage to outrun or survive this monster, you still have the arctic freeze to look forward to. The blank white canvas of this land makes it feel like you are alone in this fight and that rescue truly is thousands of miles away.

The music is reflective of this setting, which is incredibly strange considering it was composed by Ennio Morricone, who you might recall as the composer of the bombastic and grand “The Good, The Bad And The Ugly.” Yet “The Thing” has a score that comes at the opposite end of the spectrum – minimalistic, somber and other-worldly. When set against the arctic landscape, it often feels like an alien world, removed of life. There is only the cold and death.

John Carpenter’s “The Thing” is an exercise in paranoia, while always being logical yet tense and horrifying. The practical effects and lack of jump scares give this a timeless quality that relies on the nature of the unknown, that what we do not see is what scares us the most. Easily my favorite horror film.

Although, “The Thing” is not actually the most terrifying film I have seen. Stay tuned, as later in this countdown, I will look at the film that scares me the most, yet is not a horror film.