Violence is many disgusting yet necessary things. Some will tell you that it is the only thing that can shake people out of apathy and make true change in the world. Others will say that it is self-destructive, petty and hateful. But there is one thing that violence is – ugly.

Violence often takes the worst parts of our humanity and has a nasty habit of sharing it with the rest of the world, reminding us of how terrible humans can be at times. Yet, for a moment, we may need a reminder of our worse traits, to bring out the better aspects and to give us something worth living for.

When it comes to violence in cinema, that stance is shared and given a new meaning. If there is a purpose or reason behind the gross and disturbing imagery in a movie, then it can give that film a unique visual style. Take for example the recent “Mad Max: Fury Road,” which features humans being mutilated, disfigured, destroyed by radiation and scavengers. But all to address the point of how savage we can be when our basic necessities, like food, water and proper medical treatment, is taken away from us. That we resort to caveman instincts when society is removed.

To me, that makes any amount of violence in the film not only okay, but also necessary. It is when the movie goes overboard with bloodshed and cruelty that it becomes obscene and not worth pursuing. Finding that proper balance of disorder can be tricky, but when it is pulled off just right, then you have a masterpiece.

One such film is David Fincher’s “Seven.” An often disturbing and hard to watch thriller, but one that you cannot take your eyes off. Once the motive behind these violent crimes is revealed, and we begin to learn more about this strange and disgusting world, everything starts to make more sense. While this certainly is not a film for everyone, those who enjoy films that creatively use violence will fall in love with this film like I have.

In an unnamed metropolis, where crime and violence is apart of the social norm, Detective William Somerset (Morgan Freeman) is a week away from retirement and intends to get far away from this filthy city. His replacement arrives, a fresh yet very brash Detective David Mills (Brad Pitt), who operates very differently from Somerset and intends to change the city. But their first crime scene together changes that, as they find a strange set-up for a homicide that seems to be more than just a crime of passion. Now Detectives Somerset and Mills must work together to stop a serial killer that has a bigger agenda than just murder.

Unlike the last two films on this countdown, which I adored for their lead characters, “Seven” is here because of the world that it creates and how dank, disturbing yet appealing it can be. From the opening scene, where Somerset attempts to fall asleep, but the screams and cries of crimes in the street keep him awake, so he uses a metronome to help relax him, this film has me hooked.

It’s not that Somerset is tried of his job and does not want to help people anymore, but that he feels like he cannot make a difference. No matter how hard he tries, no matter how many crimes he stops, that won’t stop the violence from coming. He even admits that most of the evidence and clues that he finds are never used in court, if his case even makes it to court.

In his eyes, this town is beyond saving. That it has gone passed the point of a “hero-villain” relationship, and that a hero could do nothing to help it. The villains had won, and Somerset is now realizing that.

Mills, however, wants to play Batman and save Gotham from these superstitious and cowardly criminals, as naïve and chest-pounding of a gesture that is. And this serial killer has become his Joker.

Speaking of the serial killer, he just might be the most entertaining and methodical I have ever seen. Part of that is because of the actor playing him, whom I dare not spoil, since that was part of the marketing strategy when the film came out in 1995 – keeping him shrouded in mystery and intrigue. But let’s just say that his cold lifeless stare is terrifying, as if he is looking into my soul attempting to find my sins.

Because our sins is how this killer gets at us. He amps up the dire situations of this city, by showing that his victims were not “innocent,” and was merely punishing each of them for being an embodiment of one of the seven deadly sins. This guy goes through some of the most elaborate and extensive ways to kill these people, which obviously took at least a year of commitment, resources and patience. He is not doing this for personal gain or vengeance, but to give the world new meaning to these basic sins.

The strange thing is that, when Mills and the majority of the police department learn that these murders are based off of the seven deadly sins, they all act as though they’ve never heard of them. As if to say that they don’t think there is anything wrong with being greedy, prideful and lustful. Which just might explain why this city is as dark as it is – even the protectors have never considered their sins.

All the more reason for this serial killer to remind them.

This pushes “Seven” beyond the regular entertainment of a thriller, and gives it a mythology and symbolism. It fascinates through being disturbing yet necessary.

“Seven” is the darkest film by David Fincher, which is saying something, considering that he would go on to direct “Fight Club,” “The Girl With Dragon Tattoo,” “Zodiac” and “Gone Girl.” But what puts “Seven” on this countdown, and makes it a better film than his others to me, is not that it is his darkest, but because it provides us with a dark reflection of our own world, where we let our basic desires to control and reign get the better of us. Without actually showing much violence – the film knew when to cut away from violent imagery but still give us just a taste of it – we are given a world where darkness overpowers the light, and it is a struggle to fight for what is right. 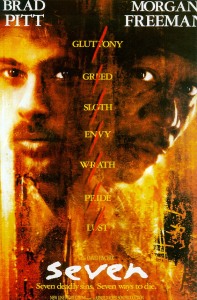