M. Night Shaymalan is one of the strangest oddities in current filmmaking. When he started out with “The Sixth Sense,” everyone was blown away by his creativity and simplicity, as he had given us a thriller that has not aged at all and continues to impress audiences to this day. After that, it is clear that Shaymalan thought highly of himself and thought anything he created was a work of genius. This has led to many disastrous movies, such as “The Happening,” “The Lady In The Water,” “The Village,” “After Earth” and “The Last Airbender,” with each film going further down the rabbit hole.

But before Shaymalan descended into full madness, he did manage to give us one more good film. People debate over whether that film is “Signs” or “Unbreakable.” After seeing Shaymalan’s work that serves as an homage to super heroes, as well as a deconstruction of them, I can honestly say that “Unbreakable” is just as good as “The Sixth Sense.”

Much like Shaymalan’s other great work, there is a creepy yet undeniable atmosphere to the film. In the case of “Unbreakable,” it plays with the idea that we’re not in control of our destiny. That fate has decided whether you are good or evil, and there is nothing that you can do to stop that. No matter what you do with your life, no matter what you’ve accomplished, life has already chosen if you are a bad guy. This makes the film utterly terrifying, especially near the end when we get our classic Shaymalan twist.

For a movie, this is a rare and often neglected point of view – the negative effect of a pre-chosen fate. Most films about this path are about how we should trust the grand plan of the universe and believe in it. But “Unbreakable” insists that thousands of innocent lives are endangered because we must follow the “grand plan.”

That being said, “Unbreakable” is often pretentious with the cinematography and exaggerated color scheme, as well as the long-drawn out pauses in dialogue that we’ve come to expect from M. Night Shaymalan. However, there is much more to love about “Unbreakable” than there is to hate, and that makes this one a creepy yet unforgettable ride. 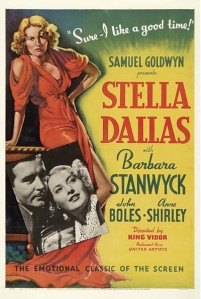 A little known fact about me – If I had to pick a favorite actress of all time, it would be Barbara Stanwyck. Her ability to deliver such ferocity, charm and sentiment is unlike anything I’ve seen in any actor or actress. She could melt any screen with just a single tear, and “Stella Dallas” proves that.

I’m convinced that this film was created specifically to show off just how great of an actress Stanwyck could be. In this film, where Stanwyck plays the titular role, we see this poor-born girl go through a myriad of life changes, some good and others terribly selfish and greedy. She ends up marrying a rich man, and Stella ends up falling in love with the idea of being rich and popular, causing the two to drift apart. But not after the two have a child together, and Stella takes the baby to raise on her own, even if the father moves away for business.

At this point, Stella forgets all about her other life and grows into the role of a mother, and all the sacrifices that come with that. Her own personal happiness is tied directly to her daughter, Laurel. She only wants to give her daughter a good life, one that Stella did not get. But as Laurel grows older and learns more about the world and her father, it might just be that living with Stella might not be the best path for Laurel in life, much to her mother’s dismay.

Of course, all of this comes to a head in the last scene in the film – which I will not spoil – where tragedy and success meet, and one of the crowning moments in Barbara Stanwyck’s acting career is found. A moment where, through no dialogue at all, Stanwyck communicates to us about loss, pride, respect, acceptance and happiness. The pain that she must be going through is excruciating, but the joy that her job as a mother has led up to this moment is even greater.

“Stella Dallas” is not just a great example of Barbara Stanwyck’s acting abilities, but a modern-day tragedy about a fear that all mother’s must face – their children growing up and becoming adults themselves. A timeless tale that pulls at the heart and reminds us that being a parent is a difficult task, but it is also a very rewarding one.

Some time ago, I wrote a review of the 1925 version of “The Phantom Of The Opera,” and discussed how the only true memorable part of the film was Lon Chaney’s terrifying and haunting performance as the phantom. In a way, the 1939 version of “The Hunchback Of Notre Dame” is the same way with its lead role, played by Charles Laughton, but with the added benefit of developing this distant and foreign world.

If you’ve watched the Disney version of “The Hunchback Of Notre Dame,” then you will see a similar plot in this film, though with less musical numbers and no talking gargoyles. What the 1939 film changes though is that Quasimodo (Laughton) is now deaf from being near the bells for this long, and has very few lines of dialogue. Laughton must communicate to Ezmerelda and Frollo through facial expressions and body language, which is made even more difficult with the large amounts of make-up on him. Yet he is able to give Quasimodo this loving and curious attitude, even though the lack of dialogue and make-up.

Though Charles Laughton’s performance is the reason to watch this film, what I found the most intriguing was how strange and ancient this 15th century France was. The wealthiest citizens are amazed at the sight of a printing press, able to create a book in under a week, as opposed to previously taking two to three years to make one bible. Or how King Louis XI talks about Christopher Columbus attempting to travel west to get to India faster, and other aristocrats speaking up to say that they know the world is flat and that he’ll fall from it.

Most of these gave me a good chuckle, but at the same time, this is the world they lived in. Where they had not discovered what we now know and go off merely their own faiths and beliefs, and accept them as truths. Which is why someone like Quasimodo would be forced to live in a church, locked away from the rest of this prejudice and scared society.

“The Hunchback Of Notre Dame” certainly has many elements worth checking out, including Charles Laughton’s performance and an exciting climax where Quasimodo must fight off most of Paris. It is a bit slow near the middle of the film and Ezmerelda is a pretty forgettable character. Still, this one had a lot going for it.

I’m beginning to realize that I am not the biggest Steve McQueen fan.

Don’t get me wrong, I think McQueen is a one-of-a-kind actor. I’ve never seen anyone turn in a performance like him, in that his are often emotional, but also silent and distant. In “Papillon,” McQueen plays a convict, wrongly accused of a crime he did not commit, and is sentenced to life imprisonment on Devil’s Island, the French equivalent of Alcatraz.

The problem with “Papillon” is that McQueen never really attempts to connect with the audience. We just go along with him for the ride, as he attempts to escape from this prison, for over two and a half hours. The second half of the film is incredibly tedious to sit through, as we just wait for the film to end once McQueen and his friend (played by Dustin Hoffman) nearly escape.

I don’t know about you, but something is wrong when the audience is just waiting for the something to happen so that the film can end.

That being said, “Papillon” does not pull any punches when it comes to the violence of prison. We see realistic depictions of a man’s head being cut off via guillotine, as well as throats being cut and fresh bullet holes through people’s heads. I was surprised when some of those happened, as I did not think the film would go that far.

Still, these random acts of violence aside, “Papillon” does not have much going for it. The acting from Dustin Hoffman is nice, as always, but McQueen just sits around and waits for events to happen and the film gets stale half way through.

H.G. Wells (played by Malcolm McDowell) invents an actual time machine, then gets it stolen by Jack The Ripper (David Warner), and now Wells has to chase him down in present-day San Francisco. Oh, and the film is written and directed by Nicholas Meyer, the same man who gave us “Star Trek II: The Wrath Of Khan.”

If that is not enough incentive to go out and watch this unbelievably crazy, wacky yet hilarious story of two famous historical figures time traveling, then I don’t know what is. It is worth watching just to see Malcolm McDowell playing the author of “War Of The Worlds” and “The Time Machine,” attempting to understand how cars work.