Furious 7 is the highly anticipated sequel to Fast & Furious 6 (2013) and takes place after the events of The Fast and the Furious: Tokyo Drift (2006).

After taking down Owen Shaw (Luke Evans) and receiving pardons for their past crimes, Dominic Toretto (Vin Diesel), Brian O’Conner (Paul Walker), Mia Toretto (Jordana Brewster), Letty Ortiz (Michelle Rodriguez), Tej Parker (Chris “Ludacris” Bridges), and Roman Pierce (Tyrese Gibson) attempt to resume their normal lives. Brian struggles to adjusting to life as a father while Dom tries to help Letty recover her lost memories. However, this is the least of their problems; their actions in London have put Dom and his crew in the crosshairs of Deckard Shaw (Jason Staham), a rogue British special forces assassin who vows revenge for his comatose brother. When Deckard kills Han (Sung Kang) in Tokyo, Dom vows to avenge Han’s death and protect his family by any means possible.

Furous 7 was Paul Walker’s final film project before the tragic car accident that took his life in November 2013. At the time, the film was half completed and there was speculation as to whether or not the film would continue or be cancelled. After discussions, it was announced that filming continue and the film would be revised to retire the character of Brian O’Conner. The film went from becoming the first in a new trilogy to finishing the film for Paul. To help finish filming, Paul’s brothers, Cody and Caleb Walker, were chosen as stand-ins to complete the unfinished scenes that featured Brian. The completed film includes a combination of CGI of Paul’s face and the use of  camera angles and lighting featuring Caleb and Cody to simulate his appearance. 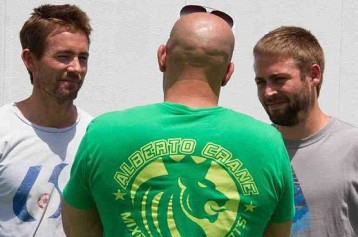 Using a CGI face of an actor and placing it on a stand-in is far from an uncommon technique. For example, the production of Tron: Legacy used a CGI face of younger looking Jeff Bridges and placed his face on a stand-in. It was an impressive feature in 2010, he CGI can look cartoony. This isn’t the case in Furious 7; the CGI face of Paul was practically flawless and was very well done and was passable for the viewer to believe it’s Paul Walker. The only drawback of this process were some lines of dialog, where the voice pitch was similar to Paul’s but clearly not the same. Despite the voice pitch variation, Cody and Caleb did a wonderful job filling in the shoes of their brother and deserve credit for wanting to help complete his final movie.

At the time of this review, Furious 7 has earned over $1 billion world wide and it’s clearly evident that this movie is a box office success. While you have to admit fans of the franchise were eagerly anticipating this movie, the root of its success was due to the buzz around Paul Walker. It’s reminiscent of when Heath Ledger died prior to the release of The Dark Knight back in 2008. But it bears the question: how good is the film?

Fans of the franchise could tell you that starting with Fast Five, the franchise moved away from the street racing theme that made up the first four movies to a heist-style action franchise in order to attract viewers who may not be interested in car culture. Each entry was made on a bigger budget and had its moments where the action gets amplified than in the previous entry. Furious 7 doesn’t back down from that trend, and at times it’s completely ridiculous. And while narrow minded critics who demand realism won’t be satisfied, for the rest of us, it’s an absolute blast. It might be considered the “junk food” of the film genre and contain no mental substance, but the action sequences are enjoyable to watch. It’s similar to the recent wave of superhero team-up films, but instead of costumes, super powers and city-wide destruction, it’s fast cars, wide-eyed stunts, and well coordinated fighting with some car crashes sprinkled in.

Acting wise, you get what you expect from Vin Diesel, Dwayne Johnson, Ludacris, Tyrese, Jordana Brewster, and Paul Walker (who has notably improved his acting ability in each subsequent Fast & Furious film. However, the stand out performance belongs to Michelle Rodriguez. Michelle finds herself playing a huge role in Furious 7, and she doesn’t disappoint. While she had her scenes in Fast & Furious 6, she didn’t get the chance to work with Dom and the Crew until the final fight. This time, she’s there from the start and fits in well. Like Paul Walker, Michelle’s acting has improved from their first appearances in The Fast and The Furious, showing more than just a gruff tomboy attitude that she’s been stereotyped for. She still portrays Letty with the tomboy charm, but she has an added sex appeal and is able to go toe-to-toe in a fist fight. She got to put her dukes up against MMA fighter Gina Carano in the last film and this time she goes up against UFC’s Ronda Rousey. Despite the films being more male oriented with its action sequences, Letty breaks the eye candy mold and shows she’s perfectly capable of kicking butt.

Kurt Russell as US Government spook “Mr. Nobody.”

Furious 7 also introduces Jason Statham, Kurt Russell, Ronda Rousey, and Nathalie Emmanuel to the franchise. All four make their presence known in the film, but the best of the lot was Kurt Russell as Mr. Nobody, a government spook that offers to help Dom locate Deckard Shaw. You’re not sure if Mr. Nobody is really helping them, but he’s captivating with a tongue-in-cheek sense of humor that makes him likable in addition to being mysterious. Second best of the new crew belongs to Jason Statham, who provides a menacing villain to the likes that Dom and the Crew have never encountered before. We don’t get much of a reason to dislike him other than the fact he kills Han and wants everyone dead, but it’s enough that the final fight with Dom has you on the edge of your seat.

While there are good performances by some of the new cast, we also get the less than stellar ones. Rousey served her role as the muscle for a brief fight scene with Letty, but her dialogue comes across rather stiff. Unlike Gina Carano, who had acting experience prior to Fast & Furious 6, Rousey is new to the acting game and her lines sound robotic and monotone. She has the potential to be a good actress with a freak physique, but she needs more time with an acting coach. As for Emmanuel, her character serves her purpose but she doesn’t do much to stand out, making her character rather forgettable.

Lucas Black also makes a short appearance in Furious 7 by reprising his role as Sean Boswell from Tokyo Drift. Although the film is supposed to take place after Tokyo Drift, it’s been 9 years since that film was made and Lucas Black looks much older than 17-year-old character he plays in the film. It was disappointing that he didn’t contribute much to the plot of Furious 7; it was reported in 2013 that Black would reprise the role as Sean for the 7th, 8th and 9th installments, suggesting his character would contribute more to the story. 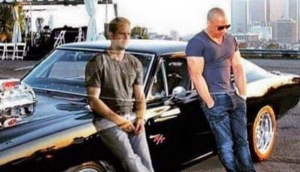 Gone, but not forgotten.

Overall, Furious 7 is an entertaining and fun movie, but you have to go in and allow yourself to enjoy the film rather than nitpick it. It won’t be winning best picture at the Oscars (Sorry Vin), but the movie has substance and heart, especially with an ending that will surely stir some kind of emotion out of you. But just because it’s the end for Brian O’Connor, don’t expect it to be the end of the series. This franchise still has plenty of mileage left in the gas tank.