Paul’s Movie Review Of “Unfriended” (2015) – The Internet Fights Back 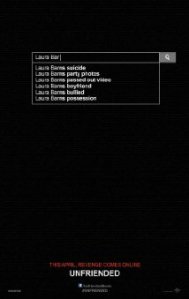 One of the often unnoticed aspects of horror is that the roles of our “heroes” are typically played by unknown or new actors. People that the audience has never heard of before, and thus have no stigma or personality attached to the actor’s name.

How would you feel if the role of Norman Bates in “Psycho” was played by Gregory Peck or Robert Mitchum, instead of Anthony Perkins? Both Peck and Mitchum are spectacularly captivating actors, but we probably wouldn’t be able to get roles like Atticus Finch out of our mind to believe what Norman Bates does.

Horror is often at its best when the audience is just as much in the dark as the lead characters are. When the actors are people that we don’t know, they stop being actors and become ordinary people stuck in a horrific incident that may cost them their lives – lives that we are now invested in.

This is one of the strengths of “Unfriended,” one of the most unusual horror movies in a long time. While I recently praised “It Follows” for the creative setup and use of its monster, “Unfriended” takes the creativity up a notch by not only having the entire film shot from the perspective of a teenage girl’s computer screen, but also the ever-present monster and the mystery behind its powers.

When Blaire sits down for a skype call with her friends one night, the group ends up getting a mysterious caller that won’t leave the chat and finds a way back in every time they retry the call. Soon after, new photos and conversations surface from Laura Barns Facebook page, who killed herself one year ago after a video of her getting drunk and passing out went viral. As the conversation progresses, Blaire’s friends begin to think that the mystery caller might be Laura who has come back to get her revenge. 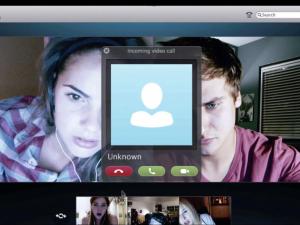 The strangeous yet most alluring part of “Unfriended” is how the film is able make each of these characters sympathetic and relatable, yet so satisfying when something terrible happens to each of them. For the majority of the film, we are lead to believe that everyone in the group did nothing to hurt Laura and that it was the internet’s fault. But all too soon, the truth, cover ups and fake Facebook accounts show themselves and we learn exactly what of each of them did that made this unknown presence so angry.

As for the monster itself, it is hard to pin down exactly what it is. There is never a physical manifestation of it, due to the way “Unfriended” is filmed, but the creäture is able to hack any computer and take over dead people’s accounts. It is never explained if this cyber threat is Laura or some force pretending to be her, but one point is made clear – Whatever it is, this monster knows each of the main characters darkest secret and intends to expose them to the internet. 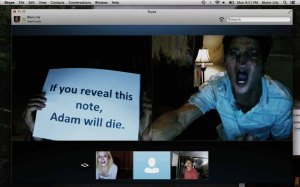 While people praise the internet for the ability to communicate with the world like never before, we don’t often consider the repercussions of sharing everything we say or do with the world-wide web. If we mess up in the real world, it can be forgotten and move on from it. But on the internet, that video, tweet or Facebook post will last forever. Everyone you know and care about will see it and no matter how hard you try, that is now apart of your life open to ridicule and scorn from across the information superhighway.

So what if the internet knew about the evil things that some people had done, leading to the death of someone, and wanted to get even with these teenagers who didn’t think they were doing anything wrong? Just another possibility to the monster behind “Unfriended” that makes it all the more terrifying. 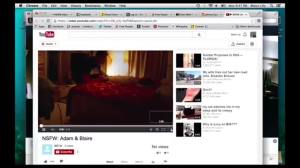 Overall, “Unfriended” is a welcomed horror film that feels reflective of today’s social media-based society and takes full advantage of the set-up and framing device. The mystery of how the electronic creäture works keeps the film from getting stale and the characters supply a never-ending emotional roller coaster. It does drag at a couple of points, but the film more than makes up for it with all the style behind the use of computers as exposition and scares.