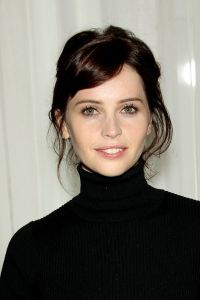 Felicity Jones has been cast for Star Wars: Rogue One.

First let’s start with the news about the stand-alone movie. We reported before that the stand-alone would be directed by Edwards, but it now will officially be called Rogue One and is the first in “a unique series of big-screen adventures that explores the characters and events beyond the core Star Wars films.” The movie will be written by Oscar nominated writer Chris Weitz (Cinderella, About a Boy, Antz). Also revealed was the casting of English actress Felicity Jones (Like Crazy, The Amazing Spider-Man 2, The Theory of Everything) in a currently unknown role. The story idea apparently came from John Knoll, an Academy Award-winning visual effects supervisor who happens to be the chief creative officer at Industrial Light & Magic. The film will be released December 16, 2016 and will begin production in London this summer.

As for the news regarding Star Wars: Episode VIII, Iger announced that Rian Johnson (Looper, Brick, Breaking Bad) will write and direct the movie, which will take place after J.J. Abrams’ The Force Awakens. Abrams will serve as executive producer of the movie, which will be released May 26, 2017–forty years and one day after the release of the original Star Wars film.