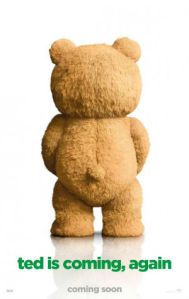 This time around, Ted (voiced by MacFarlane) has just become a newlywed to Tami-Lynn (Jessica Barth), the grocery store cashier from the first movie. Ted and Tami-Lynn want to have a baby, but in order to become a legal parent, Ted has to prove he’s an actual person in the court of law despite being a living teddy bear. Vowing to help his best friend, John (Whalberg) enlists the help of an attorney named Samantha Lane Jackson (Amanda Seyfried) to help Ted win his case.

Notably absent from the trailer is Mila Kunis, who played John’s girlfriend Lori in the original film.