Now this is a step in the right direction.

For the past couple years, I’ve had nothing but complaints when it comes to the state of comedies in cinema. Aside from poor storytelling, films being nothing more than excuses to enact improve with little film work being done or just retelling the same jokes over again, comedies recently have not been funny.

I mean, isn’t that the reason we watch comedies? To laugh? It should not be that hard, but filmmakers seem to have forgotten just what constitutes as comedy and instead focus on the grotesque, insulting and disrespectful.

Luckily, every once in a while, a shining beckon of hope shows up to make audiences remember that true comedy comes from the situations and circumstances, and not verbally ripping people apart. Last year, that was Martin Scorsese’s’ “The Wolf Of Wall Street,” but this year we have Writer/Director Chris Rocks’ “Top Five.” While the film is not saying anything new, it does give us some fleshed out characters getting into all sorts of hijinks.

Andre Allen (Chris Rock) was once voted the world’s funniest man and had a string of successful Hollywood blockbusters, but now finds himself wanting to be taken seriously. With the release of his new film about a Haitian Revolution and getting married to a big-name reality television star, Andre should be happier than ever before. That is until the New York Times sends reporter Chelsea Brown (Rosario Dawson) to follow Andre around for a day and see just how messed up his life truly is. 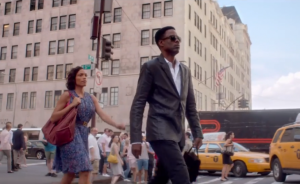 What really stood out to me was how dynamic and diverse the lead characters were. These two are big names in their respective fields, but have their dark sides as well. Andre was an alcoholic who fells like he is not funny unless he is drunk, but has been sober for four years now. Chelsea has made many relationship mistakes and still suffers from her mistakes in the past.

“Top Five” fleshes these characters out at a reasonable pace, not unloading it all at once, but not saving it until the end either. It makes these two not only relatable characters, but feel more like people and not just a bunch of punch lines and pop culture references.

That is the comedy of this film in a nutshell – reactions. Watching Chris Rock respond to a crazy situation with two sexy women and a drunk Cedric The Entertainer is funnier than the situation itself. Most of that comes back to the comedic timing and acting skills of the lead characters. 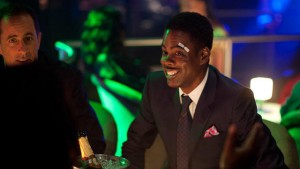 Yet, the film still takes the time when there is a serious moment to slow down and appreciate the dilemma. When Chelsea reveals some shocking secrets about herself, Andre does not immediately jump in with a snappy comeback, but has questions for her.

Aside from the lack of good jokes, this is what comedies are lacking today. That realistic approach to characters and the need to slow down and appreciate the situation, instead of just trying to make the audience laugh.

Overall, I appreciated “Top Five” more than I enjoyed it. While I did laugh throughout the film, the story itself was not that interesting, but the characters more than made up for that. I respect Chris Rock for taking such a bold step like this and coming out with a product that understands what makes comedy so great. 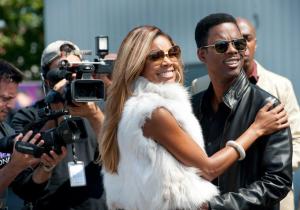