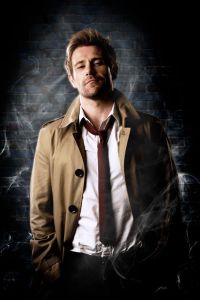 Instead of being sent to Hell, John Constantine will be spending time in Purgatory to await his fate.

On Sunday, NBC announced that the freshman series would stop production after completing its 13-episode order. Deadline reports that the cast and crew were told of the news on Friday. The show will continue to air in its 10 PM Friday night time slot for the remaining 8-episodes.

Just because the series will cease production after 13 episodes doesn’t mean the series is cancelled. Unlike Bad Judge and A to Z, NBC claims the circumstances with Constantine are different. While both those shows are officially cancelled, NBC still has the option to pick up Constantine for a second season.

Entertainment Weekly doubts NBC’s seriousness to renew the show for another season, pointing out that Constantine averages 4.5 million viewers and a 1.4 in the 18-49 demographic. The numbers are lower than its lead in, Grimm, which averages 6.3 million and a 1.8.

However, Deadline notes that NBC was encouraged by news that last Friday’s episode saw a 38% increase in ratings, the highest mark since the Pilot and hours after the network decided to halt production.  NBC appears supportive of the show as it will air a marathon SyFy Channel this weekend. SyFy is a sister station of NBC, which is owned by NBC Universal. Cast members from Constantine will also be featured during Macy’s Thanksgiving Day Parade.

Constantine is based on characters appearing in the Hellblazer comic book series, which is published by DC Comics under their Vertigo imprint. The series, created by Daniel Cerone and David S. Goyer, stars Welsh actor Matt Ryan (The Tudors) as John Constantine, a self-proclaimed exorcist and master of the dark arts who struggles with his faith and is haunted by the sins of his past. Things suddenly change when John is thrust into the role of defending humanity from a gathering supernatural threat.

Do you think Constantine will be renewed of a second season, or is the series destined to reside in Hell? Let us know what you think in the comment section.