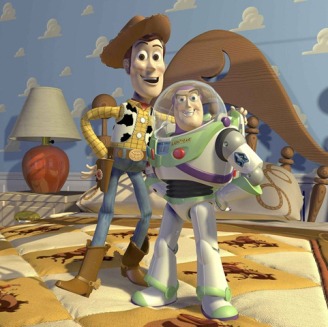 Woody and Buzz are back for a fourth adventure.

Your favorite toys are coming back to the big screen.

Woody, Buzz Lightyear, and the rest of the Toy Story gang will return for Toy Story 4 according to Disney Chairman Bob Iger. The CEO announced on Thursday that plans are underway to bring the 4th entry in the popular Pixar film franchise to the big screen in 2017. John Lasseter, Andrew Stanton, Pete Docter, and Lee Unkrich, the storytellers who have been involved in all three Toy Story films, will return. Lasseter, who directed the first and second films, will direct the 4th film (the third was directed by Unkrich).

In an interview with the LA Times, Lasseter said Toy Story 4 will be a “love story” and pick up where Toy Story 3 left off, with Andy’s old toys handed down to a little girl named Bonnie. Lasseter stated that they weren’t doing a sequel for the business aspect, but because it’s “pure passion.” He went on to say, that the characters were like family, and that they “don’t want to do anything with them unless it lives up to or surpasses what’s gone before. Toy Story 3 ended Woody and Buzz’s story with Andy so perfectly that for a long time, we never even talked about doing another Toy Story movie. But when Andrew, Pete, Lee, and I came up with this new idea, I just could not stop thinking about it. It was so exciting to me, I knew we had to make this movie—and I wanted to direct it myself.”

Variety also reports that Tim Allen and Tom Hanks will reprise their roles as Buzz and Woody. Allen made the casting official on his Twitter account:

Although it’s not official, we should expect to see the return of Joan Cusack (Jessie), Don Rickles (Mr. Potato Head), Blake Clark (Slinky Dog), Wallace Shawn (Rex), John Ratzenberger (Hamm), Estelle Harris (Mrs. Potato Head). However, Toy Story 3 didn’t feature Bo Peep, RC, Etch, and Wheezy, so it’s possible some characters that have stuck along through the third movie might not return for the 4th.

Toy Story 4 will be written by  Rashida Jones and Will McCormack, and will be released June 16, 2017.