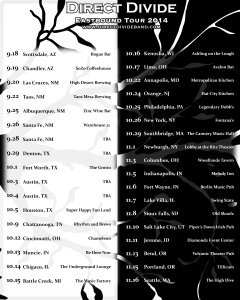 Since I am an original Seattle native, the band Direct Divide has hit the Seattle music scene pretty big here in the Pacific Northwest. When acts like Lindsey Stirling have helped put the violin back on the map, Direct Divide ups that with strong vocals and a great orchestral feel, almost to the levels of the legendary Hans Zimmer.

Fans had the chance to enjoy their album “Bridges” along with a tour accompanying that release. Direct Divide is now back on tour, with dates all across the country in support of their upcoming EP and new single “Abduction”. By the end of this year, Direct Divide will have celebrated an album release, a single release, two west coast tours, as well as a national tour.

“Abduction” feels like a single that you would see in a trailer for a new action movie during that final climatic scene. Razz, the lead vocalist of the group, also plays the electric violin that is front and center throughout all Direct Divide’s songs. Kevin Proctor provides guitars and keys in the band, while Valdemar Huguet is the drummer that rounds out this trio.

Take a listen to “Abduction” below and tell us what you think. Also take a look at the upcoming tour dates to the left to find out when Direct Divide will be playing in a city near you. They are definitely an act that you don’t want to miss. Direct Divide thrives on the road, and their non-stop touring shows their passion for their music.