Godzilla has transcended many limitations of his niche genre and has become a pop culture icon. Whether or not you’ve actually seen one of his movies, you are aware of what Godzilla is. He has a movie career that expands over sixty years and thirty movies, longer than both James Bond and Doctor Who. Godzilla has made his impact on the world, whether through its anti-atomic weapons message, the excitement and fun in his movies, merchandising or his many spin-off creations.

In the mid-1960s, when Godzilla’s popularity was at its height in Japan and space adventure films and shows were what people wanted to see, there were dozens of filmmakers trying their hand at making giant monster movies. Every studio seemed to have their answer to Godzilla, including “Gappa,” “Daimaijin” and “Monster X From Outer Space.”

But the only other giant monster that seemed to enjoy success was Daiei’s answer to Toho’s King of the Monsters: The friend to all children, Gamera. Or as he would be renamed later, the Guardian of the Universe. 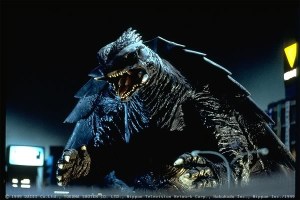 If there was ever any other giant monster that could give Godzilla a run for his money, it would be the fire-breathing turtle with huge fangs and can fly. Ridiculous? Certainly. But, for that very same reason, people enjoy watching Gamera’s wacky antics as he fights monsters like the flying terror, Gyaos, and the alien monster with a giant knife for a head, Guiron.

With a career that started in 1965 with “Gamera, the Invincible” and has lasted through the 2005 with “Gamera: The Brave” and another rumored film in the works, Gamera has over a dozen films and has also gained fame around the world.

I believe there are many factors, but the biggest one is how humans are incorporated into the Godzilla and Gamera movies.

When you think about it, in the face of such giant creatures who are unharmed by our weapons, we look insignificant and puny. It would be easy to make us look like nothing in the face of these monsters, and thus the human characters would be cast aside and forgotten about. What can we do to stop these massive threats?

But one thing the Gamera and Godzilla films did was never forget where they came from. These films are always focused on the human characters, rather than the monsters. Rather than showing only monsters attacking a city or blowing up the military, they show humans dealing with tragedy or loss that was caused by the giant kaiju and then show how we respond to these events. Along the way, we find out about the existence of these monsters and suddenly our need to stop them grows we more dire. Yet even the face of these insurmountable odds, we never stop trying to defeat our new foe.

In 1954’s “Godzilla,” it opens up with the creäture destroying several boats with a huge flash of light. The first thing the movie does is show the families of the sailors on those sunk vessels, begging for any news on what happened and if their loved ones are still alive. The situation becomes even more dire when they get a report that only three crewmen lived, and the families begin to cry and claw at the doors to know which three men lived.

Other the opposite side of the spectrum, we have “Gamera vs. Guiron,” which starts out with two little boys playing around and hoping that they could go into outer space. They miraculously get their wish, as a space ship just happens to show up right in front of them as the alien craft auto-sets itself for another planet. It’s a good thing that Gamera catches this and follows them to make sure they arrive saftely.

“Godzilla” lets us know right off the bat that this won’t be just a rampaging monster movie, but a sad tale of loss and tragedy and how we respond to it. “Gamera vs. Guiron,” while not going the same route as “Godzilla” still puts its human characters in the front of everything else, as Gamera is now watching over the boys.

Other giant monster movies think that audiences attend solely to see the monsters and nothing else. But if there is no heart or human connection to any of these events, then why should we care about of it?

It should also be noted that both Godzilla and Gamera offer an important lesson to humans and how they treat the world. Godzilla’s is obvious: don’t use nuclear weapons or else we might create something far more powerful and dangerous than a bomb.

Gamera, especially in his later films, became a guardian of the earth. Not a guardian of humanity, but the planet. He cares about every living thing, which includes animals, trees, mountains and people. He will protect the earth from anything that threatens it. But in these later films, they make a point that, since Gamera isn’t looking specifically after humans, if we posed a big enough threat to the planet, through our continued use of pollution, deforestation and nuclear testing, Gamera could turn on us. We may have a guardian on our side, but he might not protect us if we keep hurting the planet.

Things like this give the Godzilla and Gamera films their own heart and identity. These films can be remembered for more than just their action sequences, but also what they had to say and how it affected the characters in the film. This puts the movies in a reality that is close to our own and makes the human scenes worth watching.

Perhaps another reason these two giants have survived for so long is because of how vastly different they are from each other. Godzilla and Gamera have widely separate personalities and attitudes to their films.

Godzilla’s movies normally take themselves quite seriously, with how they respond to the monster attacks, always remembering how many people are being destroyed by these behemoths and giving us little glimpses into the lives of the people merely trying to escape being crushed by Godzilla. The films treat their audience like adults and respects their intelligence.

Gamera, however, is geared towards children, at least he was at first. Gamera is willing to lay down his own life to protect children, kids are always the protagonists of Gamera movies, and Gamera will take the time to make the kids and audience laugh by playing his enemies bodies after he is done. Not to mention Gamera swinging around like an olympic gymnaist and the Gamera theme song.

In his 1990s trilogy, Gamera got a face lift and make him more adult while still keeping his core values. He was still a protector and grew strength from his links to certain humans, while his enemies became more brutal. The films also took special care to add in scenes of innocent people getting destroyed by these monsters, akin to the early Godzilla films.

It boils down to Godzilla being an unstoppable force of nature, while Gamera is a watchful protector. The Godzilla series takes special care of its human element, while the other makes plenty of room for comedy and hijinks with giant monsters.

This not only makes them so different from one another, but also explains why they became so popular. You get the full range of giant monsters by watching these two series. What you couldn’t get from one, you got from the other. It attracts all sorts of crowds without the audience getting tired of kaiju.

So why is it that Godzilla always comes out on top of Gamera? Why do people think more highly of the King of the Monsters over the Guardian of the Universe?

I think this boils down to something interesting I realized about Godzilla’s transformation over time. Godzilla never stayed the force of nature that could destroy us at a moments notice. He turned into a reluctant hero that would fight space monsters, and then eventually into a super hero like Gamera.

I believe this is due to the major revolutions going on in Japan when these films were released. Once the threat of nuclear annihilation died down in Japan and the threats of space and Communism arrived in the early 1960s, Godzilla changed so that he continued to represent nuclear weapons, but also show how bigger foes are out there and need to be stopped. In the 1970s, when the counter-culture came in and pollution was a major threat, Godzilla changed again, this time into a hero that could combat Japan’s biggest threats.

But once the Cold War reached its boiling point in the mid 1980s, it seemed like nuclear weapons were a big threat again. Thus, Godzilla saw a return as a major threat to the world and to his atomic roots.

I bring this up to prove the point that Godzilla’s changes as a character are rooted in Japan’s own fears. Whatever they may be, Godzilla was there to either represent those fears or to fight them. This means that Godzilla has always changing and in tune with how Japan feels. That is why Godzilla reigns supreme over all other giant monsters, including Gamera.

To Japan, Godzilla and Gamera are more than just giant monsters. They are their hopes, dreams, fears, doubts and strength all manifested in one form. A form that is sometimes terrifying, but always exciting to watch.