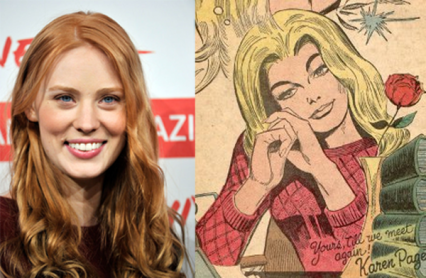 Marvel’s Daredevil series on Netflix has found its leading lady.

In the comics, Karen Page is the longest running love interest for Matt Murdock/Daredevil, with her first appearance in the very first Daredevil issue. The character was briefly seen in the 2003 film adaption played by Ellen Pompeo (best known for her leading role in Grey’s Anatomy), but her the majority of her scenes were cut from the final film. The scenes were subsequently restored in the Director’s Cut.

Karen Page does die in the comics after being murdered by Daredevil’s mortal enemy, Bullseye. Whether Woll’s character will die towards the end of the 13-episode series will be up for debate by comic book fans.

Daredevil will stream on Netflix in 2015, and be third Marvel television series in the shared cinematic universe along with Agents of S.H.I.E.L.D. and the upcoming series Agent Carter.