Paul’s Reviews of “Edge Of Tomorrow” and “22 Jump Street” 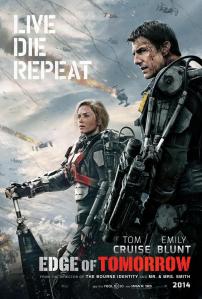 Sometimes a film works out better when you go in with zero expectations. When I saw the trailer for “Edge Of Tomorrow,” I had no interest in seeing it. To me, it looked like a sci-fi/action version of Harold Ramis’ “Groundhog Day” while replacing the hilarious deadpan of Bill Murray with the aging and out-of-place Tom Cruise.

But, much to my surprise, I began to hear people saying it was a fun and enjoyable film and worth a viewing. So, since I hadn’t been to the movies in a while, I decided to go see a couple of films, and “Edge Of Tomorrow” was the first on my list.

I went in expecting to be put to sleep or be insulted by how it portrayed our militaries, but came out having a good time. Part of this was because, like myself, the film did not take itself seriously at all. It recognized the ridiculous situation of Tom Cruise reliving the same battle again and again and decides to have as much fun with it.

For the last few years, Europe has been slowly overtaken by a race of aliens, known as the Mimics, with military forces trying their best to combat them, with no success. Now these aliens threaten to overtake the rest of the world, which leads the armies of Earth to launch an all-out strike against the Mimics before they can fight back. The United States even brings in a new military weapon that makes even the most untrained rookies become expert soldiers.

Major William Cage (Tom Cruise) gets sucked into this attack, even though he faints at the sight of blood. After being branded a deserter and reduced to the rank of Private, Cage is enlisted and set into combat, only to be killed like every other soldier sent in. So it surprises Cage when he finds himself at back at the base, living the day again.

The enjoyment of the film comes out of logical path Cage takes as he relives the battle countless times. We are never given an exact number of how many times he has done this, but it is enough to try to save everyone in his company from being squashed, burned alive or shot, as well as learning where each of his platoon members comes from, how they got their nicknames and why they enlisted.

The snarky comments that Cruise develops over repeated outcomes is what brings a smile to my face and show that he is having fun with this. That Cruise is not treating this like another action role, but as a distinct character who has lived this moment far too many times.

Rather than focusing on the philosophical implications of this, “Edge Of Tomorrow” instead decides to joke around with the scenario. Cage never complains about wanting out of this, but embraces this opportunity as a way to help the human race.

This is what I mean by the film not taking itself seriously. This could have been a dark and gritty tale about a cursed man who is being tortured to live this nightmare for all eternity. Yet, this is about a man’s struggle to save the world with his unique gift. For that reason, this film is fun to watch.

Oh boy. I can tell this is going to be another bad year for comedies.

My biggest complaint with 2013 was the lack of good comedies, with the two films that made me laugh the most being “The Wolf Of Wall Street” and “Iron Man 3.” If “22 Jump Street” and the trailers before it are any indication, I get the feeling 2014 is going to go the same way.

Here’s the thing about comedy in films: While these types of movies are created to make us laugh, they are still like any other work of cinema. If they fail at storytelling and filmmaking, then no amount of comedy is going to save it.

For whatever reason, most comedies over the last few years have simply become excuses to have a few gags or stand-up comedians try their routine on a grander scale. This is why movies like “Anchorman 2: The Legend Continues” and “This Is The End” fail as movies. They might make you laugh, but that doesn’t make them good films, just good joke-fodder.

“22 Jump Street” falls into the same class as many other comedies of the last few years, by having some jokes that work, some that don’t, and all wrapped up in a plot that is nonsensical, convoluted and does not amount too much.

After the success of their last undercover operation, Schimdt (Jonah Hill) and Jenko (Channing Tatum) try to do some bigger police work, only for it to fail spectacularly. This leads them to be reassigned to do the same operation they had done, by being sent in as college students to investigate a new type of drug that has led to the death of a student.

As I mentioned, there are jokes that do get a good laugh, and those are mostly when the film is being as meta as possible. For example, Jenko wants to do something more with his career, like becoming a member of the secret service and protect the president, an oh-so subtle nod to Channing Tatum doing just that in Roland Emmerichs’ “White House Down.” Or that the boss of Jump Street (played by Ice Cube) gets a brand new office…that looks like a giant ice-cube.

But the funniest moments come during the closing credits, when the filmmakers clearly state that they are not going to make anymore “Jump Street” movies, and instead decide to throw out every ridiculous idea for possible sequels, with names like “25 Jump Street” or “2121 Jump Street.” This includes the role of Schimdt, at one point, being replaced by Seth Rogan and back to Jonah Hill.

Yet, there lies the problem. The funniest part of the film comes during the end credits. I don’t know about you, but I think that’s sad and says a lot about how unfunny the rest of the movie is. Even more so since these credits have nothing to do with the rest of the film.

The plot is a jumbled-up mess. It wanders around aimlessly, trying to find a point and reason for all the comedy to exist, but spends no time developing these characters that it becomes pointless. When “22 Jump Street” tries any sort of drama, it fails miserably because there is no resolution to any of it.

It all becomes an excuse just to lead to more unfunny comedy, like Jenko trying to join a Frat house or both trying to discuss their feelings as “partners” with the school psychiatrist.

So while there are certainly funny moments in “22 Jump Street,” it is not worth sitting through the rest of the movie to get there. Just wait for those scenes to come out as clips on YouTube and you won’t miss a thing.