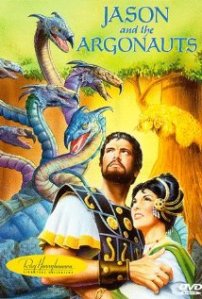 It should be known that I’ve only before watched one other Ray Harryhausen film, “The Beast From 20,000 Fathoms.” It did not go well.

While I do believe that Harryhausen’s effects were the best part of that particular movie, it certainly was not enough to save it from being a bad movie. The story was forgettable, the characters were laughable and the pacing was all over the place. So while I do not blame Harryhausen for what made the film unbearable, it was still a painful monster movie to watch at times.

Yet, I could still understand the genius behind what Ray Harryhausen did in the film. While stop-motion animation existed long before he did, Harryhausen took it to an entirely different level by creating detailed and intricate creatures which moved with their own breath and heart beat.

This is why I believe “Jason And The Argonauts” is often called Harryhausen’s best work. In earlier films, you get one or two creatures with this beautiful animation, but in “Jason” you get no fewer than four distinctly diverse monsters, each with their own movement and sequence. 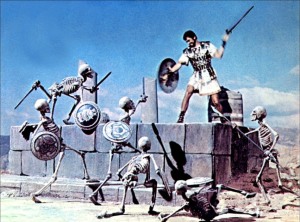 During the time of the Greek Gods, the greedy Pelias attacks the city of Thessaly, kills King Aristo, and takes it for himself. This angers Zeus and his wife, Hera, because Pelias goes against the orders of the gods and kills an innocent woman in Hera’s temple. Out of this, a prophecy is born, where the child of Aristo would be the one to rise up and kill Pelias.

Twenty years later, the only remaining child of Aristo, Jason (Todd Armstrong), has now reached manhood and intends to get his kingdom back from Pelias by obtaining the Golden Fleece from the far off land of Colchis, at the end of the world. After an meet with Zeus and Hera, Jason promises to get the Fleece his own way, but praises the gods for their generosity.

And so, Jason assembles the strongest and bravest men in Greece to join him on his journey to the end of the world, where they face many threats, including some from within his own crew. 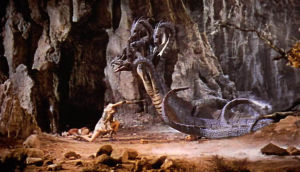 Like with “The Beast From 20,000 Fathoms” the special effects work in this film is the real highlight. There are so many sequences that stick out in my mind, and each one has a difference in size and scope.

Some are compact and tight-fisted, like the battle with the Harpies or the sword-wielding skeletons. While others are massive and must quick thinking over brawn, like the copper statue of Talos or crossing the chasm of the Clashing Rocks, only to be saved by the sea-god, Triton.

The struggle against Talos sticks out to me more than most others, because of how Talos moves and his appearance. I say Talos is made of copper, because he appears brown and shiny on some surfaces, but is rusted and green on others, much like the Statue of Liberty. Talos is not some creature with an armor coating, but a statue given life and acts so. He is massive, impenetrable, dense and uncaring. 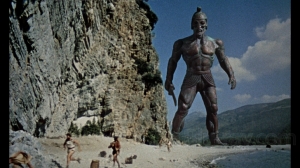 Each of these sequences gives the movie character and adds to this world of gods and monsters. The diversity is what makes the film worth watching over and over.

However, if “Jason And The Argonauts” falters on anything, it would be the lack of development for characters and story. We get some story in the beginning of the film, but only enough to set up the basics: Jason is pissed off at Pelias and wants to get his kingdom back, so he’ll get the Fleece to do just that.

Everything else is an excuse to lead into the next action sequence, as Jason and his crew travel across the world and meet many dangerous obstacles along the way. After awhile, it becomes predictable and makes the non-action sequences forgettable and not worthy mentioning.

This gets even worse when few of the Argonauts have any sort of character. We hardly learn the names of any of these brave and fearless warriors, let alone what the offer to the group. The only ones we do learn about are quickly abandoned in the story, like Hercules and the young intelligent man that he befriends. While their bonding is nice to see, we only get a scene or two of that before the film focuses on other aspects. 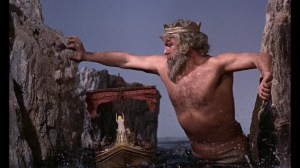 Which is rather disappointing, since the scene where Jason holds a contest to see who gets to sail with him was an enjoyable sequence, with a wide ranger of characters showing of their unique talents and how cocky they were because of their skills. It shows there was a chance for good characterization in this film, but it was forgotten in favor of other aspects.

In the end though, I got a similar feeling from “Jason And The Argonauts” as I did from a good Godzilla film: A film that takes itself rather seriously, but still has a good sense of adventure and fun. It is not afraid to pull any punches, but it knows that people are here to see some exciting action sequences and delivers on that.

For what “Jason And The Argonauts” does with its monster and sword sequences, the film excels, with wonderful work by Ray Harryhausen and a fitting score by Bernard Herrmann (composer of “Vertigo” and “Psycho”) that amplifies the tension and direness to many fights. The problem comes with just about everything else being lackluster or forgotten. The film is fun to watch for its towering Talos statue or skeleton sword fight, but don’t expect that level of excitement throughout the entire movie.