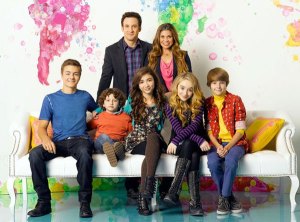 The pilot is FREE on the WatchDISNEY app and on iTunes. It will premiere on Disney on Friday, June 27th at 9:45 PM.

The pilot does a lot to try and hit the ground running, and succeeds almost in full. The show parallels a lot with the previous incarnation as well. We have a Shawn in Riley’s best friend Maya (Sabrina Carpenter). We have a more lady-confident Minkus type in Farkle (Corey Fogelmanis). Cory and Topanga’s younger son Auggie (August Maturo) has a lot of Eric in him. The new kid Lucas (Peyton Meyer) is Riley’s version of a Topanga. And the series wouldn’t be the same without a Mr. Feeny – taken over by Cory as Riley and Maya’s 7th grade history teacher.

What made the first episode succeed real well was the fact that the show didn’t bring in too many of the former cast members to make it gimmicky. Instead, we get a similar plot to the season two episode of Boy Meets World “Me and Mr. Joad”. In that episode, the students were told that there would be no more tests, and when Mr. Feeny rescinds that notion, the Cory and Shawn lead a protest. In the Girl Meets World pilot Riley and Maya lead a protest against homework. It parallels well in the episode and is a great start to the series.

The one thing that is noticeably missing is Topanga. While Cory shares almost as much screen time as Riley, Topanga is largely absent from the episode. This probably is just because the pilot already was jamming so much into the episode, but hopefully she is present more in the future.

Many fans were worried about Disney “Disneyfying” the show, making everybody sing and making the show very juvenile. There’s two points to counter this: A) when Boy Meets World started, Cory and Shawn were in 7th grade and the show matured as it progressed – much like I think the series will do here. B) Season 7 of Boy Meets World was actually very juvenile. I think Disney has done a great job balancing it here and giving everyone something that they want.

While many fans might be skeptical going into the series, I would say to try out the first one or two and give the show a chance. You’ll probably be pleasantly surprised – especially by a cameo in the pilot.