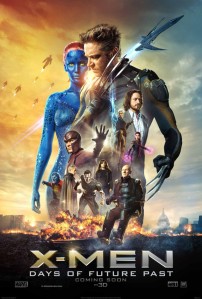 Days of Future Past picks up after the events of 2006’s X-Men: The Last Stand and 2013’s The Wolverine. In 2023, Earth has become a dystopian battlefield where robots known as Sentinels are wiping out mutants and humans with the repressed X-Gene in their DNA. A group of Mutants consisting of Kitty Pryde/Shadowcat (Ellen Page), Colossus (Daniel Cudmore), Roberto DaCosta/Sunspot (Adan Canto), Bobby Drake/Iceman (Shawn Ashmore), James Proudstar/Warpath (BooBoo Stewart), Clarice Ferguson/Blink (Fan Bingbing) and Lucas Bishop (Omar Sy) make up a group of resistance mutants that are under attack from the Sentinels. Their secret weapon? Kitty’s ability of projecting a person’s consciousness back in time, allowing a member of the group to travel back in time by a few days or weeks into their past bodies and warn their past selves about the upcoming danger and change the events of the future.

Through the use of a built-in Cerebro on the X-Jet, Charles Xavier (Patrick Stewart) locates the mutant group and meet up with Kitty’s group. Charles, accompanied by Erik Lehnsherr/Magneto (Ian McKellen), Ororo Munroe/Storm (Halle Berry) and Logan/Wolverine (Hugh Jackman), reveals his plan that Kitty must send one of them back in time. According to Charles, at a peace conference in Paris in 1973, Raven/Mystique (Jennifer Lawrence) killed a man named Bolivar Trask (Peter Dinklage), the man responsible for experimenting on Mutants and the creation of the Sentinels. Raven’s actions strike fear in the world’s governments, leading to the creation of the Sentinel Program. Charles proposes that one of them goes back to 1973 and stop the assassination attempt. Due to the dangerous process of sending someone’s consciousness that far into the past, Wolverine volunteers and Charles tells him that in order to succeed, he’ll need to unite his younger self  and the younger Erik. The elder Erik describes as “a time we couldn’t be further apart.”

Wolverine awakens in 1973, but his task isn’t easy. The 1973 Charles (James McAvoy) is an absolute mess; he’s devastated by the failure of his school and haunted by the final moments of X-Men: First Class when Erik (Michael Fassbender) abandoned him and turned Raven away from him. His only company is that of Hank McCoy/Beast (Nicholas Hoult), who has developed a serum that allows Charles to walk, but it suppresses his mutant powers. Even though they know of the events to come, Erik and Charles struggle to put their differences aside in order to change the timeline. As Wolverine attempts to change the past, the Sentinels are closing in on the group in the future. As they race against time, it leads the X-Men to wonder if their actions will be enough to save the future of the mutant race. 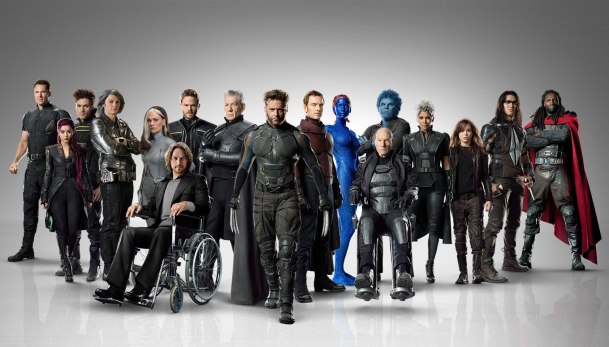 The cast of X-Men: Days of Future Past

Bryan Singer makes his return as director of the X-Men film franchise for the first time since X2: X-Men United in 2003. Days of Future Past serves as a both sequel to X-Men: The Last Stand and X-Men: First Class, bridging the actors of the original X-Men trilogy with the actors of the new series into one film. 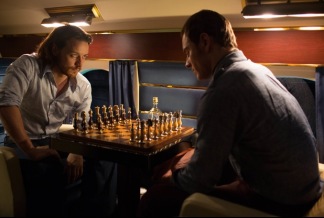 Days of Future Past fills in another chapter of the early relationship between Charles (James McAvoy) and Erik (Michael Fassbender).

One of Days of Future Past’s greatest strengths is showing the relationship between Charles and Erik. In the original trilogy, we were shown that they were in conflict with each other and we do not see this happen, but we know Charles still has an attachment to his old friend, despite how evil Magneto has become by declaring war on the humans. X-Men: First Class gave the audience a deeper look into their friendship, bringing a new dynamic that helped us connect with the characters and feel the emotional break of two friends, two mutant brothers, splitting up. In Days of Future Past, we are treated to two sides of Erik and Charles’ relationship: the strained, emotional feelings of Charles and Erik toward each other as they work together in the past while in the future, Erik and Charles are re-united, but it took the extermination of mutants for them to set aside their differences and work together as allies. We feel what Charles feels in believing everyone is capable of redemptive qualities, something we see on display in elder Erik’s actions in that turn Magneto from villain into a redemptive hero.

The dynamic of Charles and Erik is part of the excellent acting in the movie, highlighted by Jennifer Lawrence adding depth to the character of Mystique. In the original trilogy, Mystique was a more of a presence; a sinister, cold blooded assassin who was eventually abandoned by Magneto when she was “cured” to which she becomes the spurned lover and turns against Magneto in an effort to take him down. In First Class, we saw a lighter side of Raven; one who struggles to fit into society and believing her mutant shape shifting power to be a curse. In Days of Future Past, Raven is less innocent than she was in First Class, resembling more of the person she was in X2 (especially in her combat abilities) but Lawrence brings humanity to the character, showing conflict with her moral values as Raven, influenced by Charles, versus her moral values as Mystique, influenced by Erik. 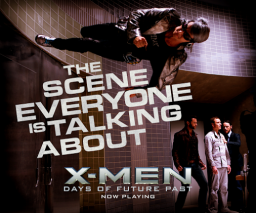 The scene involving Quicksilver (Evan Peters) was one of the most memorable special effects scenes in recent memory.

The special effects takes a massive leap from the films before it, and it shows. From from the distinguishing costumes and sets distinguishing 2023 and 1973, the CGI Sentinels, Mystique’s transformation effects, and even to Erik’s intense raising of RFK Stadium and floating it toward the White House outshine the special effects of the films before it. The best scene, visually, is the scene in the Pentagon kitchen involving Quicksilver (Evan Peters) as he protects Charles, Hank , and Wolverine from armed guards firing their guns at them. Reportedly being shot at 3,600 frames per second, the scene is most memorable for Quicksilver’s super speed as he runs on walls, moving around the kitchen, re-positioning guards and moving bullets. We’ve seen super speed portrayed on television and on film, but the scene is visually and aesthetically fantastic, especially when Quicksliver pokes a guard in the cheek, showing a skin ripple effect. Days of Future Past is Bryan Singer’s largest production he has worked on (having a higher budget than Superman Returns, his prior big budget film) and it pays off with stunning visuals and intense action scenes.

Singer deserves the most credit for reviving the X-Men franchise. While there are some questions as to how Charles Xavier lives in this film (a complaint that many people missed by not seeing the end-credit scene in The Last Stand), Singer managed to fix the butchered mess that was created in X-Men: The Last Stand and repair Wolverine’s origin story in X-Men Origins: Wolverine by using time travel to erase prior franchise history and create a new series (similar to 2009’s Star Trek). What we get is a repaired continuity timeline, eliminating the the sloppy, continuity conflicting timeline and leaving enough room for creative freedom in future films involving the younger cast.

While we’ve had two other writers here on World of Entertainment feel that Singer wasn’t on his A-Game or find the film underwhelming (a C+ grade), I’m taking this review from the standpoint of someone who reads comic books and enjoys watching superhero films. As a writer and film reviewer, I tend to focus more attention on detail and facts to form my opinion of what makes a good superhero film. This was a great movie, even potentially better than the recent movies that Marvel Studios/Disney has produced for the MCU’s Phase Two. The production itself was solid with a plot that draws from the “Days of Future Past” comic story line from 1981. I do not agree that the plot is a “mess.” While there are some plot holes, the story does not feel sloppy or poorly edited (I direct you to X-Men Origins: Wolverine as a prime example of those critiques), and it’s the franchise’s strongest entry involving Singer’s direction since X2.