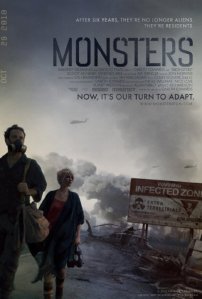 With the impending release of the new Godzilla film, it should be fitting to look at the one other film that director Gareth Edwards has created, “Monsters.”

This film garnered success with critics for its attempt to tell a somber modern day monster film and how a monster attack might effect the world. Edwards not only directed, but also wrote the screenplay, handled cinematography and did the visual effects as well, and on a budget of $500,000 no less, which is miniscule for any film budget.

Sadly though, there is little reason to watch this film as it tries to tell a human story of survival in a inhospitable land, but loses its way incredibly fast and becomes boring and repetitive. This one was difficult to watch without reaching for the remote.

After NASA discovers that life may exist on another planet in our solar system, they send a probe to collect samples, only for it to burn up on re-entry and sending the samples all across the border between the United States and Mexico, causing these creatures to spawn forth and wreck havoc on the unsuspecting populace.

Six years later, this area has now been called the “Infected Zone” and the U.S. government has been building giant walls to keep the aliens out. A young photographer, Andrew (Scoot McNairy) has been given the task of tracking down the daughter of his boss, Samantha (Whitney Able), who is deep in the heart of Mexico and return her to America at whatever the cost.

There are many problems within this film, but lets start with the first problem I noticed. This film, like many great monster movies, focuses on the human element of a monster attack. That’s fine, as we see the wreckage of these attacks and the toll it has on the environment. However, this film seems to take specific care to show that humans have not changed their lives at all.

We see families in Mexico who just brush off the husk of a tank in their front yard and don’t care one little bit that these aliens could kill them at any moment. We hear from a taxi driver that he lives in this area because of his family and that they’ll survive. That is literally the best answer we get as to how they feel about all this and why they don’t give a damn about aliens killing their loved ones.

It is the end of the world as we know it, and they literally feel fine.

Let’s look at another monster film, “Pacific Rim,” as it attempts to show us how monster attacks have changed their world. Within the first ten minutes of the movie, we see just how devastating these attacks have effected the public, as well as the rise of the Jaegers and the excitement that this brings. They start mocking kaiju, building merchandise and using kaiju body parts as a way to solve illnesses.

That is how you show what a monster attack can do the world. Within no time at all, “Pacific Rim” is able to build a whole new world that isn’t too far from our own yet still fascinating. “Monsters” on the other hand, can’t be bothered to do anything more than show the aftermath of attacks and not build its world.

But that can be forgiven if the journey of our protagonists is a memorable one. After all, the story is the backbone of any good movie, so an unnatural world can be overlooked. It’s just too bad the story is just as terrible as the world itself.

This boils down to our two main leads, Andrew and Samantha, who are so generic and tasteless that I’d rather eat cardboard than listen to their dull conversations.

Andrew is one of the biggest idiots I have ever seen, and not in a good way. In the heat of an alien attack, he has to keep asking stupid questions as to what is attacking and why their escorts are carrying guns. Then there’s the little issue that gets them into this mess at all, by losing both of their passports after paying for ferry tickets to back to America. It’s not like he misplaced them or anything, he literally slept with some girl and she stole everything while he ran to the docks in his underwear. I have no sympathy for this guy, because everything that comes out of his mouth is moronic.

Samantha, on the other hand, has no character. She walks around with Andrew, stares blankly at everything and has no emotional reaction to all the death and aliens around her. There is so much of her character that goes unexplained. For example, she has a broken arm during the entirety of the movie and we never find out how it happened. We also never learn why she is in Mexico and why she wanted to get away from her fiancée.

Being shrouded in mystery is one thing. Not even addressing the questions and leaving a huge gap in your character arch is something else entirely.

These two have zero chemistry together. When Andrew is doing something, Samantha is not reacting to anything and just bits her nails. When Samantha tries to help out, Andrew is confused and looks lost. They attempt to have conversations, like when Andrew tells her about his crazy neighbor, but she has nothing to say about it afterwards, so it has no impact on the story.

These two are supposed to be the driving force behind the film, as we watch them try to make it back to America while aliens attempt to destroy everything they hold near and dear. Yet Andrew keeps asking stupid questions and makes unbelievably dumb mistakes, and Samantha can’t be bothered to show any sort of emotion.

Overall, “Monsters” is painful to watch. Scenes drag on for what feels like hours, relying either on showing the aftermath of the alien attacks or these terribly written characters who you want to slap by the end. It isn’t until the very end that we finally get a clear shot of the aliens and even that was not worth much. Stay away from this one.